Trump and Lopez Obrador Will Meet for The First Time 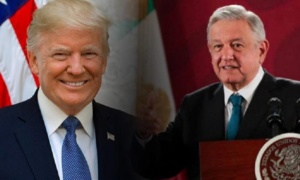 In a historic first meeting, President Donald Trump and Mexican President will meet to celebrate the initiation of the new USMCA deal.

Both presidents will meet on July 8 and 9 to renew their relationship and celebrate the new trade deal that replaces the North American Trade Agreement.

The new USMC trade deal went into effect July 1 after months of negotiations between Mexico, the U.S., and Canada that will now begin a new era of trade between the three countries.

President Trump has always called for fair trade deals. NAFTA is the one trade deal the president called to renegotiate so it could benefit the United States.

President Trump made the following statement:

“When I ran for President, I made a solemn promise to the American people that I would end the job-killing failure called the North American Free Trade Agreement (NAFTA) and replace it with a better deal for our workers, farmers, ranchers, and businesses—the men and women of Main Street who built the most prosperous and equitable economy in human history.  Today, with NAFTA ending forever and the United States-Mexico-Canada Agreement (USMCA) entering into full force, our grateful Nation pays tribute to America’s workers and celebrates their ability to overcome decades of bad deals and failed policies.

“The USMCA is the largest, fairest, and most balanced trade agreement ever negotiated and contains innovative provisions to help grow the economy and support American jobs.  It is a tremendous victory for our manufacturers and autoworkers, meaning more cars and trucks will be produced in the United States.  The USMCA is also a historic breakthrough for American agriculture.  Canada will provide greater access for American dairy products, poultry, and eggs, and finally give fair treatment to American-grown wheat.  In addition, the USMCA includes groundbreaking provisions to address digital trade, services, small businesses, and more, which will protect America’s competitive edge in technology and innovation.

“The strong and overwhelming support the USMCA received from both parties in Congress—as well as from labor unions, business organizations, and champions of agriculture—shows just how much this trade agreement will benefit all Americans.  Hundreds of thousands of jobs will be added to the economy.

“The United States appreciates the efforts of our partners in Mexico and Canada to ensure that North America is strengthening its economic ties while working to combat the coronavirus pandemic.  To mark this historic achievement, I look forward to welcoming President Andres Manuel Lopez Obrador of Mexico to the White House on July 8, 2020, to continue our important dialogue on trade, health, and other issues central to our regional prosperity and security.”