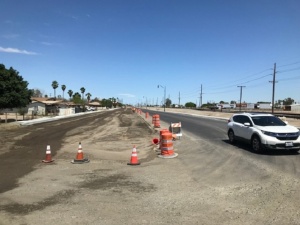 While drivers from both sides of the border are still getting used to the changes in crossing the border at the west port of entry expansion, there will be new changes coming soon that will impact traffic coming and going of Calexico.

The construction of the expanded Calexico West (Downtown) Port of Entry by the General Services Administration was complete for both northbound and southbound traffic in September 2018. Traffic circulation patterns changed to address this project during construction. However, there is still funding pending for the final phase of the port of entry expansion and does not include for the pedestrian crossing.

Southbound travelers to Mexico may also use SR111 to Grant Street in Calexico. This will serve as an alternate route and will direct traffic westerly to Cesar Chavez Boulevard as well.

Northbound traffic circulation from the POE to destinations in Calexico and beyond will remain unchanged. There will be two northbound access lanes on Cesar Chavez Boulevard to serve businesses and oversize vehicles.