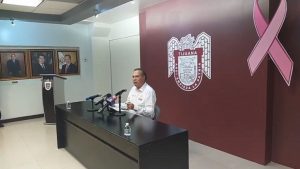 Tijuana, B. C.- The municipal president of Tijuana Arturo González Cruz, in the presence of the media, announced that he will take time out from office next Wednesday, October 14, before the council to participate in the electoral elections for governor’s office next year.

“It has become clear, very clear to all of Baja California that governor (Jaime Bonilla) and I are very different,” said González, referring to the accusations presented by Bonilla of what he called a baseness and a premeditated accusation in which the current municipal president is linked to the murder of Mariano Soto, who administered the Tijuana Sin Censura Facebook page.

The elected officer for City Mayor and who took oath on September 30, last year, announced that he will request a time out from the council, not due to the false accusations and allegations, he said, but because of his interest in participating in the internal process of the political party MORENA in relation to the State Governorship of Baja California.

Regarding the accusations, he said, “you are totally estranged from the moral principles of Andrés Manuel López Obrador (President of the Republic) and we are not going to allow that.” The current municipal president of Tijuana pointed out that the accusations by the state governor began on May 11, “when the Supreme Court of Justice of the Nation rejected his intentions to try to buy and manipulate the law to stay in power more years” he said referring to the Bonilla Law.

He pointed out that Bonilla stopped attending the security tables for four months, as well as he claimed to maintain a conflictive relationship with many around him, due to his constant criticism and remarks, thus hindering the coordination to work in favor of the citizens.

On the other hand, he assured that the state government has repeatedly sought to discredit him using illegal mechanisms to defame him with the intention of blocking him from participating in the electoral process.

González said this is one more attack, adding to the investigation threats received by the Undersecretary of the Interior Ricardo Peralta during August, regarding alleged misuse of an economic resource that would be used for his campaign. On another occasion he had already been accused by the then President of the Baja California Congress, Benjamín Gómez of attempted bribery to call a session and vote for the failed “Bonilla Law”.

“To the Morenistas, citizens, and followers of Andrés Manuel’s leadership, I declare that the governor needs his actions to be carried out with sanity, we need peace, we need his time to be dedicated to working for the benefit of Baja Californians,” said the Tijuana Municipal president.