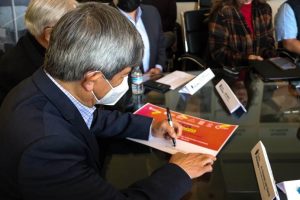 As part of seeking greater participation of those companies dedicated to cultural and creative industries in the city, Tijuana Innovadora through Comuna Creativa and the Center for International Private Enterprise (CIPE) initiated the project Mapping of the entrepreneurial ecosystem of creative and cultural industries.

In a ceremony held on March 29 at the CETYS Campus in Tijuana, the signing of this collaboration took place, the intention of which is to take the city to another level and support young people.

“We have a very promising future with our young people, however, we must work on it and take care of it because only then can we turn their ideas into realities, Tijuana Innovadora works for a better city through its people and especially its young people, that is why we support this type of initiative,” President of Tijuana Innovadora, José Galicot Behar commented.

Creative industries refer to a range of economic activities dealing with the generation or exploitation of knowledge and information. They can also be called cultural industries, especially in Europe, or creative economies, and more recently they have been designated as the Orange Economy in Latin America and the Caribbean.

The creative economy includes advertising, architecture, arts, crafts, design, fashion, film, music, performing arts, publishing, research and development, software, toys and games, television and radio, and video games. Some academics consider that the education industry, including public and private services, is becoming part of the creative industries.  Therefore, there are different definitions of the sector

The director of the project, Claudia Basurto, commented that in October 2021 an alliance was signed between these organizations to increase the civic and economic participation of young people in strengthening democratic culture through a creative economy.

“These industries are those whose activities have their origin in individual creativity, require talent to potentiate the creation of jobs through intellectual property, we know that in Tijuana these jobs are carried out more frequently through industries such as cinema, fashion, video games, museums, architecture, advertising, gastronomy, among others,” she said.

This collaboration has objectives such as researching and mapping the ecosystem of these industries, designing strategies or roadmaps, as well as generating public outreach to create awareness and understanding among young entrepreneurs.

The alliance with Cetys University will be mapped and classified by a branch of economic activity, their contribution to the labor market, their work networks, addition the challenges they have faced to carry out their activities will also be evidenced, all this will have a result, a directory that will serve to identify future sponsors.

According to Tijuana Innovadora, creative industries represent 3.3% of GDP in the European Union where they generate 7 million jobs, while in California alone they annually generate 650 billion dollars and more than 2 million jobs.