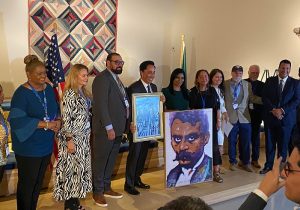 The value of having sister cities working together to build goodwill and better friendships can create better communities and inspire the next generation of leaders.

San Diego and Tijuana were selected to host the U.S.-Mexico Summit in an effort for leaders from both sides of the border will meet to learn from each other and find solutions to those challenges.

“There are many issues when you are in a border community. Locally, we can work without Mayors on both sides of the border to address issues like the environment, housing, air quality, traffic and wait times, these are the things we as Mayors can talk about and we see action on,” San Diego Mayor Todd Gloria said. “People are looking to invest, they are often attracted to border communities like San Diego because they see opportunity, they see workforce, they see innovation and that’s the message we want to put up today.”

This summit serves as a celebration of the 30-year friendship between Tijuana and San Diego. The Mayor of San Diego and Tijuana agree that the best is yet to come for both cities.

“We broke ground on Otay Mesa II which will help us reduce border wait times which will be transformational for the residents of Tijuana and San Diego and the other one is we were chosen to be the host of World Design Capital in 2024, the first time two binational communities have been given this designation. We will show the world how our binational mega-region works positively and it’s a very exciting opportunity,” Mayor Gloria added.

“We signed a binational agreement with Mayor Todd Gloria related to gastronomy, social and economic issues. We are doing it more as a habit and we can’t wait to add more things that benefit both cities,” Caballero said.

Peter Svarzbein, Mayor Pro Tem of El Paso, Texas is also the Chairman of Sister Cities International. He said to be encouraged by the participation of the Mayors of this summit.

“This is also about people-to-people exchange and relationships building that can foster global understanding and mutual respect,” Svarzbein said. “This is also an opportunity to celebrate and learn the way our two countries work so well with each other and how our cities lead the way for economic and cultural advancement.”

Carlos Gonzalez Gutierrez, Consul General of the Mexican Consulate in San Diego said this initiative is led by cities and they are here to support in any way they can.

“It’s great that they choose San Diego and Tijuana for this summit where we take the role of facilitators and not the protagonist,” he said.

Aurora Morales Gil represented the group called Chinelos Morelos in New York.  Their mission is to preserve and share the rich culture of the Mexican State of Morelos in New York City and to the world. To aid their fellow Morelenses in the U.S. and abroad. They have helped families apply for their visas so they can see their children again.

“The parents travel to the cities their children live. We have helo 6 thousand of people from all over the United States,” Morales Gil said

Sister Cities International will host mayors and citizen diplomats from around the world and across North America on October 11-13, 2022, for the U.S. – Mexico Mayors’ Community Summit.

The Summit will build on the shared values to better foster bilateral relations and demonstrate the success of Sister Cities’ partnerships. Mexico is the leading country for Sister City relationships with more than 168 formal partnerships between Mexico and the United States– thanks to the enduring commitment and cooperation of citizen diplomats.