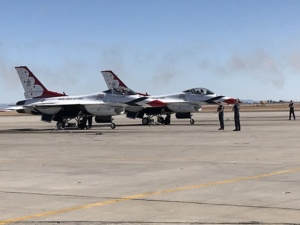 The roar of the Thunderbird planes was heard in the skies of the Imperial Valley as they landed in the Naval Air Facility in El Centro.

As part of joint training, the Blue Angels and the Thunderbirds are in the Imperial Valley to learn from each other and make themselves better pilots.

There are no scheduled performances during this exchange, however, training flights with similar profiles to the air show routine may be conducted in accordance with annual training objectives. Each team is currently in the middle of their winter training cycles.

“I am incredibly excited to share the world-class training facilities here in El Centro with the US Air Force Thunderbirds,” said Commander Brian Kesselring, the Blue Angels commanding officer and flight leader. “Our time in El Centro is crucial for transitioning in new pilots, training support and maintenance personnel, and preparing the aircraft for the high operating tempo of the air show season. This is a phenomenal opportunity to meet and integrate with our US Air Force counterparts and share best practices. Undoubtedly, the interaction between our teams this week will lead to safer and more effective flight demonstrations.”

The USAF Air Demonstration Squadron (“Thunderbirds”) is the air demonstration squadron of the United States Air Force (USAF). The Thunderbirds are assigned to the 57th Wing and are based at Nellis Air Force Base, Nevada. Created 67 years ago in 1953, the USAF Thunderbirds are the third-oldest formal flying aerobatic team (under the same name) in the world, after the French Air Force Patrouille de France formed in 1931 and the United States Navy Blue Angels formed in 1946.

The Thunderbirds Squadron tours the United States and much of the world, performing aerobatic formation and solo flying in specially marked aircraft. The squadron’s name is taken from the legendary creature that appears in the mythologies of several indigenous North American cultures.

The Blue Angels arrived in El Centro in January to train for their annual air show that will take place on March 14. The airshow is one of the signature events of the Imperial Valley that people attend every year.