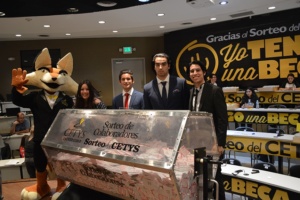 Mexicali, B.C.-With the ticket 18018 Mercedes from the city of Ensenada, earned one million dollars tax-free, in the 79th edition of the CETYSorteo Millonario, which took place at the Gustavo Auditorium Vildósola of CETYS University Campus Mexicali, a few days ago.

The second place prize for two million pesos, remained in the city of Mexicali, for Lino, with the number 245881, while Rodolfo from Puerto Peñasco won the third prize consisting of one million pesos, with the ticket 207242.

It’s important to note that the 79th edition of CETYSorteo issued 155 thousand tickets that were sold out, which confirms the mission of CETYSorteo Millonario by supporting young people who want to continue their education, since 100% of the earnings are allocated in scholarships and financial support for 8 out of 10 students of the CETYS University System.

The event was chaired by C.P. Arturo Álvarez, Administrative Vice-Rector of the CETYS University System, who thanked the community for the support given to the talented youth of the region.

“Thank you very much for supporting the CETYSorteo Millonario, our alliance is the pillar to be able to offer more financial aid every year, better integral education and optimal avant-garde infrastructure to talented young people who wish to study at our institution,” said Álvarez.

On behalf of the institution’s scholarship students, Orianna Vigil, Renewable Energy Engineering sixth semester student of at CETYS University Campus Mexicali, mentioned that having a scholarship is a responsibility and also a pride, since it means the trust in the student’s talent, and she also thanked all the public who purchased a ticket from CETYSorteo.

“Thanks to your support, I can have a scholarship, which guarantees me to continue my training in an institution that provides me with the necessary tools to be a professional that impacts the world,” said the student.

In the framework of the 79th CETYS Great Draw, the Third Collaborators Draw was also held, in which Homero from the city of Mexicali took a certified cashier’s check for 200 thousand pesos thanks to the combination of ticket # 73927.

To give faith and legality of the award, Ms. Karla Leticia Ruiz Corrales attended as the representative of the Secretary of the Interior.

The C.P. Ernesto Tamayo Camacho, Director of Draws of the CETYS University System made an invitation to all the community who bought a ticket, to consult the list of winners, which was published on the website: http://sorteos.cetys.mx  during the first hours of Saturday, May 25.