Breaking News
Home / ARTS & CULTURE / THE WAR OF THE BUDS

THE WAR OF THE BUDS

It is pronounced České Budějovic although for short they can say Budějovice OK?  Although the Germans who want to do everything their way call him Budweis. Of course, I am talking about it as a picturesque city located in the southwest of the Czech Republic which, for more detail, is the capital of the South Bohemian region.

Beer has been produced here since the 13th century. In the 16th century, 44 breweries came into existence in the town, that is, the “Budweiseans” like beer and also have a sweet tooth. Shortly after residents of the city of Plzen or Pilsen invented their world-famous Pilsener style – back in the early 18th century – Budweis brewers came up with their all-malt version that turned out to be slightly sweeter than the original. Without giving it much thought, it is logical to think that this beer had every right to be called Budweiser, that is, originally from Budweis, right? However, in those years the legal concept of “Registered Trademark” was not yet handled, much less the term “Denomination of Origin” so it was easy for the gringos to give them the win with the name.

When the term Pilsen was freely adopted by brewers around the world, the Anheuser Busch brewery founded in 1875 and located in St. Louis Missouri, many miles from the Czech Republic, decided to name its best Budweiser beer. The Budweiser gringa is also a sweetish Lager of 4.5% APV (Alcohol By Volume) although much lighter in flavor and body than the Czech beer. On the other hand, it is not an all-malt beer since it contains approximately 30% rice to soften it, and its hopping is also less marked. It is a beer that is drunk very fresh since its storage lasts no more than twenty-one days.

Currently, in the city of Budweis, there are only two large breweries that continue to produce Lagers very similar to the originals: the Samson that makes its Cristal brand beer and the Budvar brewery that makes the Budweiser Budvar. The Anheuser Busch instead became over the years the largest brewery in the world. 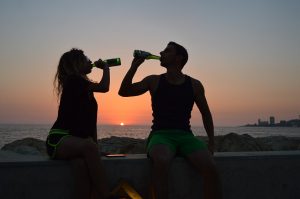 The legal dispute was generated in the year 1907 and continues to this day. Everything revolves around the right to use the Budweiser name exclusively since currently, two manufacturers use the same name as a brand for their product. This, both parties allege, confuses consumers who do not want their beer to be confused with that of the other since each one claims to have the best recipe. Although it may seem incredible, after more than 100 years of legal confrontations, no one has been able to finally win this dispute. The most they have reached is a kind of “agreement” in which each one “agrees” to divide the market while “respecting” their areas of influence. This has led to the extreme that different countries have developed their jurisprudence concerning the same problem, in such a way that you can find differences between what the Czech Republic admits, and what Germany, Switzerland, Ireland, Norway, and England admit, Lithuania and Latvia, Hong Kong and –of course- the United States of America.

This seems to have no end.  We will have to get used to the idea that there will be two Budweisers for a long time yet. If this makes you lose sleep, I recommend that you have a less problematic beer, with that it will surely calm your nerves.

What new beer did you try this week?

I leave you not without first reminding you once again that the world of beer does not end at the corner store. Explore, have fun, lose yourself in diversity.