“The USMCA would promote economic growth of North America in the coming years”: Diaz Bautista

Trump’s next 4 months could reshape international trade in the coming years. The positive economic effects in favor of economic growth in North America in case of approving the USMCA are not generally known despite the fact that we are talking about a tariff cut similar to reducing taxes on imports and exports.

“The USMCA would clearly foster economic growth of North America in the ’20s of the 21st century,” said Dr. Alejandro Díaz Bautista, economist, national researcher at Conacyt as well as a research professor at the Northern Borders College (The Colef).

While President Donald Trump will have the coming four months of deals and decisions that could shape his international commercial legacy and his chances of re-election to the presidency. The US House and Senate have not yet voted on Trump’s new trade agreement, the Agreement between the United States, Mexico and Canada (USMCA).

Talks between the administration and the Democrats about pending concerns continued in August 2019. Potentially, this sets the stage for Congress to vote on the pact in September, or for Trump to revive plans to withdraw from the Free Trade Agreement of North America if the President of the House of Representatives, Nancy Pelosi, blocks the action on the USMCA. 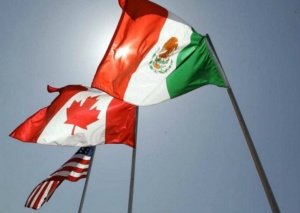 It is estimated that the USMCA would increase annual exports from the United States to Canada by more than $19 billion and annual exports to Mexico by more than $14 billion, an increase of 5% and 10% above current levels. The manufacturing sector would experience the highest percentage of profits in production, exports, wages and employment in the coming years, while, in absolute terms, services would experience the greatest benefits.

While the Canadian ambassador to Mexico, Pierre Alarie, considered it very unlikely, in fact, almost impossible, for his country’s Parliament to approve the Mexico, United States and Canada Treaty (USMCA) before his Legislative elections on October 21, although he noted that Prime Minister Justin Trudeau has the authority to convene a special meeting to be voted during the summer.