After a long wait, the USMCA entered into force on July 1 of this year. What was even seen as something a little far from reality is now a fact. And to seal the treaty in a more personal way, President Donald Trump extended an invitation to Mexican President, Andres Manuel Lopez Obrador, inviting him to Washington, where they met for the first time and affirmed, before the eyes of the entire world, the beginning of a bilateral relationship, where it is promised there will be more understanding and opportunities for the three countries (Mexico, the United States, and Canada) and those who are part of North America.

During the meeting, we saw a friendly, understanding and good-natured President Trump, who received AMLO with a respectful and flattering attitude, as well as a welcoming speech that undoubtedly surprised us all, after the hateful rhetoric and also somehow discriminatory towards Mexico and towards all fellow Mexicans, whom at one point he called rapists and traffickers, without denying that there could be ‘some good’ among the crowd. This generated skepticism among some, especially those who don’t believe that out of nowhere a president whose campaign speech and the first term has been completely “anti-immigrant”, has made a 190-degree turn in the opposite direction and has decided, out of nowhere, to change his attitude of rejection, for a friendly and accepting attitude.

Given that this happens just during the presidential campaign for reelection and that, as many presidents have done it, it sounds more like a campaign strategy to win Latino votes, which would be very difficult to believe “until you see”, and prove that that same president who has made his fortune making alliances, friendships and strategies in different parts of the planet, including Mexico, particularly our Mega-Region where, according to history, it is said that the current president of the United States led a project to build three luxury super towers with a project called “Trump Ocean Resort” near Rosarito, Baja California, less than an hour away from San Diego, California and whose project failed, what the magnate would call a Los Cabos, Baja California Sur -like development, has good intentions. 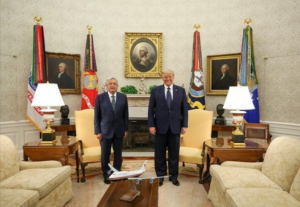 President Andrés Manuel López Obrador, more words fewer words, before traveling to Washington to meet his American counterpart, Donald Trump, for the signing and initiation of the new trilateral free trade agreement, now called USMCA: United States-Mexico-Canada Trade Agreement, assured that during the meeting in no way would he allow the slightest injury to the sovereignty of the nation.

Now, apparently, we can frankly say and with satisfaction that López Obrador fulfilled the constitutional mandate to respect and ensure respect for the sovereignty of the Nation.

“You have never sought to impose anything on us,” said Andrés Manuel when addressing his counterpart, Donald Trump, face to face, and then to finish off his intervention with this phrase that says it all: “History teaches us that it is possible to understand each other without arrogance, we are united despite past grievances.”

On the other hand, and despite the fact that many media outlets have strongly attacked the current president of the United States, I dare to say that, after reading his book “The Art of the Deal”, I think that, although Donald Trump comes from being a successful businessman, with multiple failures in his past, from which he has learned how to rise, he also has a human side that he may want to make known, but which he has hidden behind an image of power and arrogance that he has decided take to keep his followers’ support, but is also an inexperienced politician who has possibly been guided and led by his direct political advisers and who has learned by trial and error during his tenure, so now he has probably changed his mind and has decided to do things differently after the loss of more than 100,000 lives due to COVID-19, people with first and last names who will undoubtedly be greatly missed.

I personally believe that we all have the right to change, or as the saying goes “it is wise to change once mind.”

In an election year and before the elections in the United States, 19 meetings have been held between leaders of both countries.

Among the Mexican presidents who have held meetings with their US counterparts seeking reelection are: Felipe Calderón, who met with Barack Obama in April and June 2012; Vicente Fox, with George W. Bush in January and March 2004; Carlos Salinas de Gortari, with George H. W. Bush in February, July and October 1992, when NAFTA was signed; Miguel de la Madrid, with Ronald Reagan in May 1984; Luis Echeverría, with Richard Nixon in June 1982; Adolfo López Mateos, with Lyndon Johnson in September 1964; and Adolfo Ruíz Cortines, with Dwight Eisenhower in March 1956.

At the meeting in Washington, President Donald Trump stated: “The relationship between the United States and Mexico has never been so close; our two presidential triumphs focused on empowering people again.”

Trump said that the relationship between the two countries is based on mutual respect. He also mentioned that the USMCA is the best trade agreement ever written and is grateful for the collaboration that Mexico had during the negotiations.

For his part, President López Obrador said that this trade agreement is a triumph for the three nations and for their people.

“North America is one of the most powerful regions in the world, but it has one with the largest trade deficits,” said the Mexican president. “This new agreement seeks to reverse that by integrating our economies so that we can regain the economic presence that we have lost in the past five decades.”

The T-MEC is the largest, fairest and most balanced trade agreement ever negotiated and contains innovative provisions to help increase global economic competitiveness as a region, grow the economy, and support US jobs, including manufacturing and agriculture.

Additionally, the USMCA includes innovative provisions to address digital commerce, services, small businesses, and more, that will protect the competitive advantages between the United States, Mexico, and Canada in technology and innovation.

After the meeting in Washington, both presidents celebrated the encounter and stated that this first visit to the White House is due to the economic needs derived from the entry into force of the USMCA, which has been described by experts and economists as a great achievement for the benefit of Mexico, the United States, and Canada.