By: Víctor Hermosillo, Senator in México.

In 15 days Donald Trump has managed to return the relationship between the United States and Mexico to the 20’s decade levels, when back in time by a dispute in payment of oil companies’ taxes the United States was on the verge of a war that could only be avoided by the intervention of Washington Ambassador in Mexico City, Dwight Morrow.

Mr. Trump does not know to what extent the United States and Mexico are interdependent and that is why in his first days as President he has been bullying our country; since his first speech on inauguration day, he made reference on the need to monitor the borders and to think on the United States first, when in the last 20 years security and economy have been developed at a regional level, at the North American level.

At the beginning of his campaign he told us that we were rapists, drug dealers and murderers and now in his first days of government he wakes us up every morning with a tweet that provokes and offends Mexicans; saying that we will pay the wall, canceling the meeting with Peña Nieto, claiming that we have taken advantage and will raise taxes on the border.

It seems that what he seeks is to break relations with us, being that we are one of the main allies of the United States in the world for the permanent and inevitable reason that we are neighbors and that is impossible to change.

Donald Trump is a businessman bully and we must treat him as such, since at this moment he is softening his prey, in this case: Mexico, and then devour it with the simple and crude objective of winning, winning, winning, without a clear idea of what is it that he wants. Proof of this is that in the recent meeting of Secretary of Foreign Affairs and Ildefonso Guajardo, Secretary of Economy with the Trump team, the Americans did not define what they wanted to change in NAFTA, since the President does not yet know what he wants.

The reality is that we Mexicans were not prepared for an affront of this level and none of our societies had experienced a moment of tension like this between the two nations, proof of which was the Mexican government’s invitation to visit our country when he was a candidate, thinking that we would have an advantage if he became President; however, the sad reality is that it served only to deeply sink Peña Nieto and push up the New Yorker’s campaign. 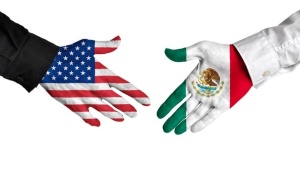 Despite this, today all Mexicans must be united to take actions that empower us against Trump, to give him a little of what he understands and for that we need you Mexicans, Hispanics, Catholics, Jews, Democrats, Republicans , Asians, Muslims, businessmen, politicians, the media and all those who disagree with the attempt to undermine the illusion of the American dream. We need to let Trump know and those who still do not accept it, that the United States and Mexico must work together and remain allies.

Mexico is the fifteenth largest economy in the world and number eleven, in terms of purchasing power parity.

Every day, a million people walk and 370 thousand vehicles cross the border through the 56 border crossings between both countries and trade between both nations reaches up to 530 billion dollars every year.

In addition, 95% of the goods that Mexico acquires come from the United States, so getting out of NAFTA would affect the US economy and we would have to look for more accessible suppliers. States such as California, Texas, Illinois and Arizona would be affected, because together they export to Mexico 150 billion dollars, this represents 63% of what comes to our country. Texas would be losing its main customer, as it sells us 37.27% of all its exports.

So, friends who live in the United States, it’s time to put pressure on your legislators and anyone who can intercede so that the Donald Trump’s horrifying scenario which seems to divide our nations does not come true, it is not convenient to any of us.

As Senator for the state of Baja California and a member of the Mexican Senate’s North American Foreign Relations Commission, I will be periodically visiting the United States to dialogue with politicians, businessmen and social actors to strengthen ties and change those who try to draw us apart.