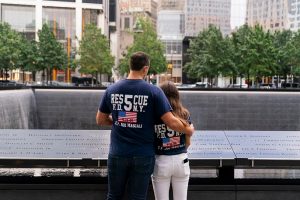 New York City and the nation marked 20 years since the 9/11 terror attacks with solemn remembrances and tributes.

On a morning much like September 11, 2001, families of the victims returned to Lower Manhattan to remember their loved ones who perished.

Despite the shared grief in the aftermath of 9/11, hope, resilience, and unity lifted everyone up as a nation. Twenty years later, these lessons are more important than ever.

The 9/11 Memorial & Museum stands as a beacon of healing and renewal – a physical embodiment of the compassion showed to one another, the resolve demonstrated to the world, and how, in the face of unfathomable loss, people rose as one. During this 20th anniversary year, the memorial shared the history and lessons learned with a new generation, teach them about the ongoing repercussions of the 9/11 attacks, and inspire the world with memories of the nation’s fortitude, strength, and resilience.

Each year on the anniversary of 9/11, the families of victims gather for a ceremony on the 9/11 Memorial plaza to read aloud the names of the 2,983 men, women, and children killed in the September 11, 2001 attacks and February 26, 1993 bombing of the World Trade Center. Six moments of silence mark the times when each of the World Trade Center towers was struck when each tower fell, and the times corresponding to the attack at the Pentagon, and the crash of United Airlines Flight 93 in Pennsylvania.

“We never forget. We never forget the children who have grown up without parents. Parents who have suffered without children. Husbands and wives had to find a way forward without their partners. Brothers, sisters, loved one,” President Biden said in his remarks on the anniversary of the attacks.

President George W. Bush, who led this country with his leadership and compassion during those dark days, highlighted the resiliency of the American people.

“The 33 passengers and 7 crew of Flight 93 could have been any group of citizens selected by fate. In a sense, they stood in for us all… These Americans were brave, strong, and united in ways that shocked the terrorists – but should not surprise any of us. This is the nation we know. And whenever we need hope and inspiration, we can look to the skies and remember.” ‒ President George W. Bush said.