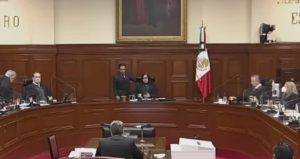 Minister Norma Lucia Piña Hernandez has been elected as president of the Supreme Court of Justice of the Nation (SCJN). With this appointment, the jurist has become the first woman to preside over the highest court in Mexico.

In just three rounds, the judge obtained the necessary six votes to be appointed. Minister Yasmín Esquivel, involved in the thesis plagiarism scandal, was ruled out to win due to the low votes.

After two failed attempts to reach the highest rank in Mexican Judiciary, Piña became the eleventh woman to reach the position. She came to the Supreme Court of Justice to replace Olga Sánchez Cordero. She appeared in front of the Mexican Senate showing a formalist profile regarding her interpretation of philosophy, saying that there are no absolute values in law.

Piña was appointed as a justice after her appearance in the Senate on November 24, 2015, after the two previous failed attempts. On September 28, 2016, Piña was chosen by her colleagues as the president of the Primera Sala (First Hall) after the justices voted unanimously. She substituted justice Alfredo Gutiérrez Ortiz Mena, who was in charge to review the criminal and civil jurisprudence cases. She is president from October 1, 2016, to September 30, 2018.

She earned her doctorate in law at the National Autonomous University of Mexico in 1986, becoming a judicial specialist at the Institute of Judicial Specialization of the Supreme Court of Justice in 1989. Piña is a criminal law specialist, with a certificate from the Panamerican University in Mexico City in 1997.

She took courses on human rights at the Institute of the Federal Judiciary, and also she specializes in judicial argumentation, earning a certificate at the post-graduate division at the University of Alicante in Spain, in 2010.