Breaking News
Home / LEGAL / The Success of Treatment Courts: Why and How They Work

The Success of Treatment Courts: Why and How They Work

Across the United States, treatment courts such as drug courts, veterans’ courts, and mental health courts are becoming more and more available to criminal defendants with special issues and needs. These courts provide an alternative to traditional modes of justice, and they work.

For over two decades, drug courts in particular have led the charge towards a more humane, cost effective justice system. Research demonstrates that drug courts provide a highly effective alternative to incarceration for individuals whose involvement in the criminal justice system is rooted in serious addiction to drugs and alcohol. By keeping drug-addicted offenders out of jail and in treatment , drug courts have been proven to reduce drug abuse and crime while saving money.

Drug courts and other treatment courts operate differently than traditional justice courts. Individuals accused of criminal wrong doing are given case plans to address their addiction issues. Services may range from out-patient drug counseling to in-patient long-term treatment, depending on the individual’s needs. Drug testing is an integral part of drug court, as is referrals to job and housing resource providers. Those who succeed at drug court often partake in a graduation ceremony, and are rewarded with certificates, cake, and recognition from the judge. Most importantly, the individuals who succeed have the opportunity to have their criminal charges  dismissed or significantly reduced. 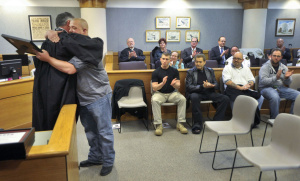 Veterans’ treatment courts work similarly. They require regular court appearances as well as mandatory attendance at treatment sessions and frequent and random testing for substance use. Veterans respond favorably to the structured environment given their past experiences in the military. Without the structure, many veterans will reoffend and remain in the traditional criminal justice system.  Veterans’ treatment courts are able to ensure that the veterans accused of criminal wrongdoing meet their obligations to themselves, the court, and their community.

Many courts also have specialized mental health courts, to handle cases in which a criminal defendant has severe mental issues. Often, these individuals do not fully understand the nature of their conduct or the potential consequences. In those cases, criminal proceedings must be suspended until the individual gets the treatment needed to understand the process. Once criminal proceedings are reinstated, mental health courts can continue to offer treatment and counseling to help the individual and to prevent re-offending.

Treatment courts are good for individuals and for the communities in which they live. As a country, we are moving away from incarceration as a response to crime. The passage of recent criminal justice reform legislation in California exemplifies the changing trends. Accordingly, treatment courts will continue to proliferate.