The Story of Santo Tomas Comes to an End 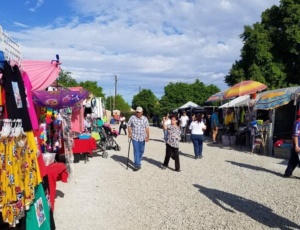 Their story with Calexico is now finished as they closed permanently.

A devastating fire was the beginning of the end for the Swap Meet when around 7 p.m. on Dec. 8, 2018, a fire started at Santo Tomas that burned down a section of the Swap Meet. Firefighters from Imperial County assisted the Calexico Fire Department in controlling the fire.

Approximately 30 lots were lost during the fire and damage is still yet to be quantified.

Merchants gathered the morning after the fire outside of Santo Tomas wanting to know the status of the Swap Meet and if they would be able to enter. Six months after the fire, Santo Tomas decided to close down due to their financial losses during the year and disagreements with the city on how to operate the swap meet due to new municipal codes that were going to be introduced next month that Santo Tomas officially deemed as not beneficial to them and their business model and had a short time to adapt to the new regulations.

It is with a heavy heart that we inform you, that after 45 years of service and mutual benefaction, our beloved Santo Tomas Swap Meet permanently closed its doors on July 1, 2019.

Santo Tomas is categorized as a swap and meet business, however, it was much more than that, it also served as and was considered the valley’s repurpose guru, one of the best recycling centers to visit, and an economical option for homeowners. For over 45 years it was also our second home, our local business school, and was the basis of the economic wellbeing for many multi-generational families.

To our vendors, suppliers, and patrons: We want to take this opportunity to express our immense gratitude and respect for each and every one of you. The work we have done together as a community and your guidance and friendship in both the good and the challenging times will always be remembered.