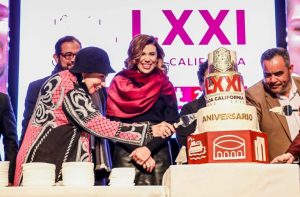 In the company of political, social, and business leaders from the seven municipalities, Governor Marina del Pilar Avila Olmeda dedicated the 71st Anniversary of Baja California as a Free and Sovereign State of the Republic, endorsing the commitment to work for the development of the state in unity with the population.

“Today, 71 years later, we consolidate the 29th State as a land in which no one is left behind and no one is left out a young, vibrant, effervescent, participatory and inclusive entity; a mural of cultures and social expressions, where diversity and creativity are our essences,” he said.

In her message to the Baja Californian society, the Head of the State Executive Branch recalled that it was on January 16, 1952, when a Decree was issued by the then President of Mexico, Miguel Alemán Valdés, which granted Baja California the status of be the 29th State of the Mexican Republic.

Marina del Pilar highlighted the celebration of the State through the unity of the Executive Power, the Legislative Power, the Judicial Power, the Government of Mexico, the Armed Forces, and the seven municipalities of the State, working hand in hand to promote the well-being of the inhabitants of the entity.

Likewise, Governor Marina del Pilar acknowledged the President of Mexico, Andrés Manuel López Obrador, for permanently collaborating with the state authorities in the actions to be followed, advancing the transformation of different aspects of public life in the State.

“Today we preserve the spirit of the kiliwas, pai-pai, cochimíes and cucapá who are the seed of our cultural identity, the courage of the navigators who explore unknown seas, the tenacity of the missionaries who place foundation stones, the faith of those who with his hands tilled the land of the Valley of Mexicali and made abundance sprout in the desert”, he expressed.

The governor highlighted that in this administration an inclusive social policy has been assumed with an approach focused on human rights, gender equality, and support for those who have been historically marginalized and relegated, always thinking of well-being as the basis on which Development of the State.

She emphasized the importance of continuing to work for a better environment for children and adolescents, single mothers, and the elderly, as well as generating economic growth where investments and budgets benefit all families.