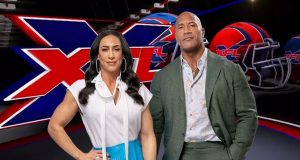 The XFL today announced that the league will return to the field for the 2022 season.

The new ownership group and league executives are in the process of finalizing the next steps for the relaunch with more details to be shared in the coming weeks and months.

The announcement was made by Dany Garcia and Dwayne Johnson through a video shared across their social media platforms.

“The XFL represents the idea of ultimate opportunity; it’s a league of soul and culture, anchored by the pursuit of dreams and love for the game, that we couldn’t be more proud to lead,” said Garcia and Johnson. “Every XFL player, coach, city, and fan is our top priority and we couldn’t be more excited to support them in an electrifying 2022 season. We are the new XFL—hungry, humble and no one will outwork us.”

“For the love of football and for the safety of our players and fans, we’ll be back on the field in 2022,” said Jeffrey Pollack, XFL President, and COO. “The opportunity in front of us, with our new ownership, is simply too big to rush back.  We want to do this properly with care and thought for everyone who loves football, especially our players, coaches, partners, and fans.”

In August 2020, Dany Garcia, Dwayne Johnson, and RedBird Capital Partners acquired substantially all of the assets of Alpha Entertainment LLC, the parent company of the XFL.

Vince McMahon’s football league filed for bankruptcy protection earlier this year after the COVID-19 pandemic wiped out the inaugural season. Johnson, an actor, and professional wrestler played college football at the University of Miami before playing a short time in the Canadian Football League.

The league intended to compete in a ten-game season and a two-week postseason in the winter and spring months, after the Super Bowl. All eight teams were centrally owned and operated by the league (as opposed to the franchise model, with each team having different ownership groups) and spread across the United States in markets currently or recently represented by an NFL franchise.