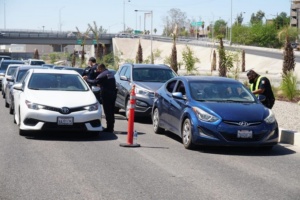 Mexicali, B.C., June 26, 2020.- In continuity with the actions to combat COVID-19, the Mayor of Mexicali Marina del Pilar Ávila Olmeda, announced that this weekend the task force checkpoints at the ports of entry will be carried out again in the Downtown area, West, Los Algodones, and San Luis Rio Colorado.

The Municipal President indicated that in a joint effort of the Municipal Government, the National Guard, SEDENA, Customs and the Health Sector, last weekend the first of these operations was carried out, which aims to control the entry of foreigners and citizens to the city for tourism or non-essential activities, as well as avoiding the excessive introduction of beers, wines and liquors.

In addition to establishing a sanitary filter to detect people with COVID-19 symptoms, to be channeled to a doctor for evaluation, and in the same way verify that they have all the preventive measures such as face covers and protection supplies.

She reported that the operation will remain throughout the weekend, starting this Friday, June 26 from 2:00 PM in Garita Centro and San Luis. Similarly, in the Garitas Los Algodones and Oriente, the inspection hours will be from 6:00 AM to 2:00 PM.

The Mayor explained that at all points there will be elements from the City Town Hall, Official Office, Municipal Public Safety, Office of Alcohol, Medical Services, Fire, National Guard, Customs, and Civil Protection of the State.

On the other hand, the Department of Alcohols pointed out that only 12 cans of beer per vehicle are allowed to enter, without paying taxes, and the crossing of more than 30 cans is prohibited, and they also reminded the public that excess of these amounts qualifies as smuggling.

So those citizens whose cars detect more than 30 units will have the option of abandoning the exceeding cans, destroying them at the inspection point, or returning to the United States.