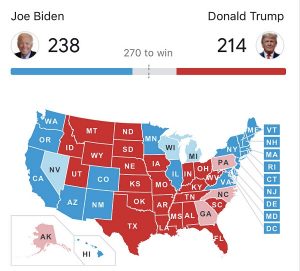 Joe Biden is winning the popular vote but that doesn’t mean he will win the presidency. Both candidates need 270 electoral votes to be elected President.

Biden is currently leading the popular vote against President Donald Trump, who has collected 66,706,923 votes (48.1 percent) as of midday Wednesday. The race for the White House continued to narrow Wednesday, hinging on just a few battleground states that are still too close to call.

The appropriateness of the Electoral College system is a matter of ongoing debate. Supporters argue that it is a fundamental component of American federalism. They maintain the system elected the winner of the nationwide popular vote in over 90% of presidential elections; promote political stability; preserves the Constitutional role of the states in presidential elections; and fosters a broad-based, enduring, and generally moderate political party system.