Inaccurate reports, half-truths, outright lies, and jokes were taken out of context circulate in various media, but especially on social media, in addition to fake images, cloned or designed to generate traffic in websites, trick images, anonymous audios, and disinformative videos.

“Fake news” has always been spread, either because of misunderstandings, or to reach or maintain political power, opinion, or an economic benefit, such as when in a tribe the shaman said that he had spoken to “the god” of the rain and that he had asked to sacrifice a young woman, to “bring the rain”, the news that the bubonic plague was transmitted due to flies and that a certain type of “rose” oil could cure it, but with the accession of the mass media, they have demonstrated the true power of “fake news”, such as HG Wells’ 1938 broadcast of “The War of the Worlds”, which was broadcast in the news format, provoking intense collective hysteria in the public, where people even committed robbery or committed suicide, to “avoid becoming slaves of Martians” the “chupacabra” or the dissemination of pamphlets by the Nazis from “the prophecies of Nostradamus” where Hitler was allegedly mentioned, and which caused France, Nostradamus’ homeland, to surrender without much trouble to the Nazis.

Who are the most sensitive to the “Fake News”? Those without a mental infrastructure or knowledge, people with a low socio-cultural and educational level, the young, who know how to use technology very well, but who do not always know how to use it constructively, the so-called “functional illiterates” who know how to read but don’t understand very well, either what they read, and elderly people, who don’t conceive what the benefit of telling a lie could be, or don’t know how to discern between false and true data, since they are not used to it. 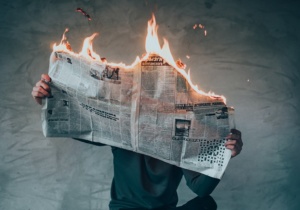 Why can they become extremely dangerous? Because they can induce to actions that harm third parties, due to ignorance or incomplete knowledge of the facts (such as the mother of an autistic girl, who saw in a magazine that chlorine dioxide cures autism, as she had no money to buy it, she searched on google and found a post that disqualified chlorine dioxide, and after reading the words “chlorine dioxide equals to chloralex” she forced her daughter to drink glasses of chloralex, resulting in the child’s death).

How can we protect ourselves from “Fake News”? Reviewing and analyzing each news that comes to us, which may be sensationalist, striking or even fantasy, objectively; from common sense, comparing data from reliable sources, and reviewing dates, and the context of data, if it’s too sensational data, catastrophic or too good to be true (Bill Gates gives you a million dollars, just for forwarding this email, a peasant in Russia causally discovers the formula of immortality, the coronavirus is of extraterrestrial origin, the water heated in the microwave causes cancer, this is the secret to making money fast and easily without leaving your house) it probably is not.

Let’s not blame this on technology, technology is not to be blamed, human nature is, social networks are the most democratic platforms, but there, the opinion of an ignorant can have the same impact a Nobel Prize-winning article would have, think before you share.