Breaking News
Home / ECONOMICS / The NAFTA negotiations will conclude by 2018

The NAFTA negotiations will conclude by 2018

By 2018, there are risks to the economy, such as elections and the conclusion of NAFTA.

“The Mexican economy continues to be vulnerable to external shocks, where the most obvious risks are the price of oil, the elections and the renegotiation of the North American Free Trade Agreement (NAFTA),” said Dr. Alejandro Díaz. Bautista, economist, national researcher of the Conacyt as well as research professor of El Colegio de la Frontera Norte (El Colef).

The economic growth estimated for 2017 increased from a range of 1.3 to 2.3% to one of 2.0 to 2.5 percent. The best performances of the economy as a whole, together with efforts to contain public spending, will contribute to the generation of a primary surplus equivalent to 0.4% of the Gross Domestic Product (GDP) excluding the remainder of the Bank of Mexico (Banxico) for the first time since 2008.

The Public Sector Financial Requirements combined with the broadest measures of public debt will be equivalent to 49.5% of GDP, which contrasts favorably with 50.1% at the end of 2016.

For 2018, a range of GDP growth between 2.0 and 3.0% is anticipated, with a lower negative contribution from some sectors, such as energy, which has been buffeted by the decrease in oil prices and the fall in raw oil production. Based on this growth and a further reduction in public spending of approximately 0.2% in real terms, an increase in the primary surplus is anticipated as a percentage of GDP at 0.9% of GDP. 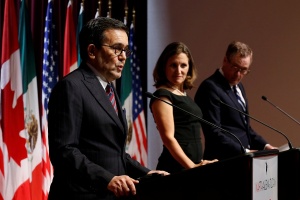 For 2018, it is estimated that the average nominal exchange rate will be 18.1 pesos per dollar. Although the volatility of the exchange rate may remain. Similarly, an amount of 43 dollars is forecast for each barrel of the Mexican mix, from the 42 dollars fixed in the previous budget.

While a crude oil production platform is expected at an average of one million 989,000 barrels per day (bpd), and an export platform of 888,000 bpd.

In the face of new demands from the United States, the renegotiation of the North American Free Trade Agreement (NAFTA) was extended to 2018.

Additional negotiating rounds will be scheduled in the first quarter of 2018, which may affect the growth expectations of the economy.

Both Mexico and the United States wanted to conclude the negotiation later this year or early next year, as both countries will hold elections the coming year.

NAFTA, TLCAN for its acronym in Spanish, created in 1994 the largest free trade zone in the world.