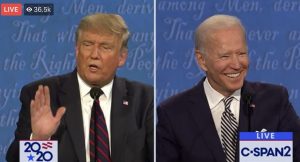 Both Biden and Trump interrupted each other during the 90-minute debate forcing the moderator to intervene many times to calm the candidates.

Trump attacked Biden and interrupted him during his answers on every subject. The technique led Biden to lose his train of thought on key points early in the debate, though he grew more and more used to Trump’s attacks as the night went on.

At one point, moderator Chris Wallace rebuked the President who was repeatedly trying to butt-in as Biden was talking. Wallace reminded him that his campaign had agreed to rules that allowed each man to speak uninterrupted for two minutes.

But Biden, within the first half of the debate, slammed the president as a “liar” and a “clown” and repeatedly called on him to “shut up.”

“Would you shut up, man?” Biden said to Trump, calling him “unpresidential.”

“You graduated the lowest in your class,” Trump said to Biden, after he said the president should become “smart” with the coronavirus pandemic.

“Don’t ever use the word smart with me,” Trump said. “Nothing smart about you Joe.”

Wallace ended Tuesday’s debate by asking each candidate whether he would pledge to urge calm among his supporters and promise not to make a preemptive claim of victory while votes were still being counted.

“I’m urging my supporters to go into the polls and watch very carefully,” the President said.

“If I see tens of thousands of ballots being manipulated, I can’t go along with that,” he added.

The debate was moderated by Chris Wallace. Wallace selected the following topics for the first debate: “The Trump and Biden Records,” “The Supreme Court,” “Covid-19,” “The Economy,” “Race and Violence in our Cities,” and “The Integrity of the Election,” according to the Commission on Presidential Debates.

The supervising commission said the topics were selected by Wallace and are subject to change based on the news cycle. Since the topics were announced, President Trump has nominated a new Supreme Court justice and faced an avalanche of question about his personal finances following a New York Times article indicating that he has paid little in taxes over most of the last two decades.

The first general election presidential debate was held on September 26, 1960, between U.S. Senator John F. Kennedy, the Democratic nominee, and Vice President Richard Nixon, the Republican nominee, in Chicago at the studios of CBS’s WBBM-TV. It was moderated by Howard K. Smith and included a panel composed of Sander Vanocur of NBC News, Charles Warren of Mutual News, Stuart Novins of CBS, and Bob Fleming of ABC News. At the outset, Nixon was considered to have the upper hand due to his knowledge of foreign policy and proficiency in radio debates. However, because of his unfamiliarity with the new format of televised debates, factors such as his underweight and pale appearance, his suit color blending in with the debate set background, and his refusal to use television makeup resulting in a five o’clock shadow, led to his defeat. Many observers have regarded Kennedy’s win over Nixon in the first debate as a turning point in the election.