Breaking News
Home / ECOLOGY / The Mission to Save the Salton Sea

The Mission to Save the Salton Sea

Once upon a time, the Salton Sea was a destination point for people all over California. It was the oasis in the middle of the desert where people could swim, fish and have a great time at the beach and enjoy the unique beauty and surroundings of the sea of the Imperial Valley.

Unfortunately, that oasis and hidden jewel of California is now a distant memory and since has become a time bomb for an environmental disaster waiting to happen. The Salton Sea is dying as state and local officials are looking for solutions to restore the sea and save it.

The Salton Sea is the largest inland body of water in California and one of the few remaining large-scale wetland habitats in the state. The Sea’s rapid decline in water level and surrounding wetlands poses significant health risks to people residing near Bombay Beach. Miles of dangerous lakebed sediments become airborne, contributing to serious medical issues in one of the already most medically underserved communities in the country.

The Salton Sea began to deteriorate since it doesn’t have drainage outlet and caused the sea to be polluted with pesticides. Temperature variability bringing more extremely hot or cold days and increasing salinity as water levels decline to pose a grave danger to the sea’s fish. Without fish, migrating birds will no longer be able to stop at the sea.

The sea’s beaches create significant air quality issues when exposed due to dust and other particulate matter that is blown into nearby communities. Public health experts claim that the current level of exposed playa has already had a direct and negative impact on respiratory and other illness rates in the region, an impact they expect will get more severe as more playa becomes exposed. 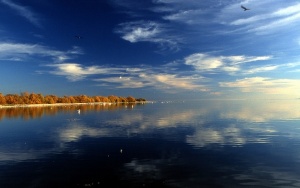 In addition, a water transfer agreement signed in 2003 known as the Quantification Settlement Agreement that sends water from Imperial County farms to San Diego and Coachella Valley has reduced the amount of water going into the sea causing habitat to suffer and has increased the amount of dust from the exposed playas.

To save the Salton Sea, California Governor Jerry Brown included $80.5 million in the 2016 state budget. This is the most the state has ever given for restoration efforts.

Most recently, Imperial and Riverside Counties created a memorandum of Understanding to work on the restoration of the Salton Sea. In the MOU, County leaders call for cooperation to fully implement a Perimeter Lake concept that would address air quality concerns by stabilizing the shoreline while providing habitat for waterfowl as well as enhancing economic opportunities in recreation and renewable energy.

“This MOU is intended to serve as a catalyst for change to improve the Sea in a way that benefits all stakeholders,” stated Riverside County Supervisor and former Imperial Valley Assemblyman Manuel Perez, who serves as a Director on the Salton Sea Authority Board. “The MOU sends a message to our state and federal partners that the locals are united and ready to lead the restoration effort.”

Another idea that is being seriously considered is importing water from the Sea of Cortez into the Salton Sea. The California Natural Resources Agency is reviewing 11 proposals from groups and engineering firms that are proposing ideas and action plans to bring water from Mexico to help restore the Salton Sea. This move, of course, will require bilateral collaboration and negotiation between the U.S. and Mexico.