After AMLO’s report, the markets became nervous and were left with more doubts than answers about the direction of the economy and the country in the coming months. So when the message of Andrés Manuel López Obrador (AMLO) ended, the exchange rate weakened again, reflecting a new depreciation of the peso against the dollar, which Sunday night was priced at $25.71 pesos per dollar in international negotiations.

“The Mexican peso has depreciated against the dollar in recent months due to a drastic drop in oil prices and the pressures of greater risk aversion in the markets due to the coronavirus crisis. The most recent depreciation at the beginning of April is due to the lack of a forceful counter-cyclical economic emergency plan in Mexico to face the coronavirus health and economic crisis in 2020,” said Dr. Alejandro Díaz-Bautista, economist, as well as a research professor at the Northern Border College (El Colef).

The markets reacted to AMLO’s speech and the Mexican peso loses 35 cents during the message, before recovering and trading at this moment at 25.15 pesos per dollar.

AMLO’s report had been one of the most anticipated of 2020 in Mexico since one of its objectives was to present the economic support plan that would be adopted after the health and economic crisis caused by COVID-19, however, the president’s words lacked forcefulness for those who expected a more aggressive stimulus plan that would help companies and people. 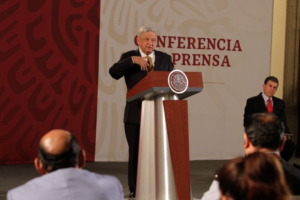 There is also a global uncertainty generated by oil for a couple of weeks, so the Mexican currency is still in free fall since it is enough to remember that a month ago, exactly on March 5, 2020, the dollar was trading at $19.84 pesos per dollar, that is to say, that in the last 30 days the peso has depreciated $5.44 pesos.

The report mentioned that the depreciation of the peso is estimated at 23 percent so far in AMLO’s government, and they are doing everything possible to maintain the commitment to not to increase public debt.

“To finance this plan without increasing taxes or enacting gasoline payments, the savings from the Budget Income Stabilization Fund and the resources that were kept in trusts will be used. We will also lean on development banking, but, above all, the same policy of freeing up resources will be followed because the Republican Austerity Plan will continue, even more rigorously, “said AMLO in Sunday’s speech

Finally, Goldman Sachs cut its growth forecast for the Mexican economy in 2020 on Monday, where it went from -1.6 percent to -4.3 percent annually in 2020, after President Andrés Manuel López Obrador’s (AMLO) support plan was announced.