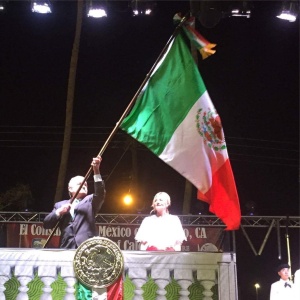 The Mexican Consulate in Calexico, on September 17th, organized the traditional “Grito de Independencia” at Crummet Park in Calexico where families enjoyed a great evening full of music and Mexican tradition. The artisitic lineup this year was made of Edgar Valentin with Mariachi Mixteco, Ballet Folklorico Municipal of Mexicali, Show D’Karlo and the musical group “La Sucursal de la Cumbia.”

At 8 p.m. Consul General Carlos Flores Vizcarra gave El Grito in a ceremony where they honored the Mexican and United States Flags. Also at the event, Calexico Mayor Luis Castro gave a recognition to Gerardo Venegas for his 25 years in the media and for supporting Calexico.