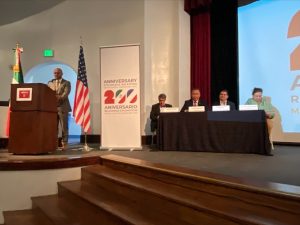 In commemoration of the long-standing relationship between the two sister countries, the Mexican Consulate in Calexico celebrated the bicentennial anniversary of the U.S.-Mexico diplomatic relations at Rodney Auditorium at San Diego State Campus.

Joined by authorities from both sides of the border came together to celebrate the history of two countries that have supported each other to overcome adversity in critical times while maintaining a solid friendship.

“With cooperation and dialogue, we can overcome long-standing challenges such as migration and security. We can do that together,” Mexican Consul Tarcisio Navarrete said. “USMCA has been a great asset to North America and that is a great example of how we can move forward.”

“I look forward to continuing this relationship since we have a lot of commonalities such as healthcare, border crisis, crimes, and other issues that affect our borders,” Calexico Mayor Javier Moreno said.

On December 12, 2022, the United States and Mexico celebrated 200 years of diplomatic relations. U.S. relations with Mexico are strong and vital, and Mexico remains one of the United States’ closest and most valued partners.  The countries share a 2,000-mile border with 47 active land ports of entry.  This bilateral relationship directly impacts the lives and livelihoods of millions of Americans, whether the issue is trade and economic development, education exchange, citizen security, drug control, migration, human trafficking, entrepreneurship, innovation, environmental protection, climate change, or public health.

The broad scope of relations between the United States and Mexico extends beyond diplomatic and official relations. It encompasses extensive commercial, cultural, and educational ties. Hundreds of thousands of people cross the border legally each day.  In addition, an estimated 1.6 million U.S. citizens live in Mexico, and Mexico is the top foreign destination for U.S. travelers.

Mexico, the 10th most populous country and the 15th largest economy in the world, is bound to the United States by geography and strong economic, cultural, and historical ties. In addition to sharing a nearly 2,000-mile border with the United States, Mexico is among the top U.S. trade partners and a major U.S. energy supplier. These ties frequently manifest themselves in legislative activity and interest across a wide spectrum of issues in Congress.

Security Cooperation: Members of Congress may continue to fund and oversee bilateral efforts to combat cross-border crime, improve law enforcement cooperation, and strengthen the rule of law in Mexico under the new Bicentennial Framework security partnership signed in October 2021.

Human Rights: Members of Congress may continue to support Mexico’s effort to address human rights challenges, including violence against journalists and human rights defenders for whom homicide rates in Mexico are extremely elevated.

USMCA: Congress may closely monitor both countries’ adherence to the USMCA, with a particular interest in labor conditions in Mexico and proposed reform of Mexico’s electricity sector that may violate key provisions of the agreement.

Border Environmental Concerns: Members of Congress may continue to conduct oversight on attempts to resolve long-standing transboundary pollution issues and water sharing on the southwest border and may consider funding for infrastructure improvements to address such problems.