The Mexicali-El Centro, California Relationship Has a Bright Future Ahead, Part II 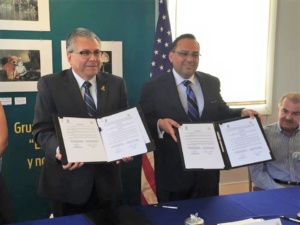 El Centro, California and Mexicali might be 30 miles away from each other but are intertwined by family, commerce, and culture so naturally making both cities enter into a sisterhood agreement was the next big step in their relationship.

This became a reality on Sept. 25, 2015, as Mexicali Mayor Jaime Diaz Ochoa and El Centro Mayor Efrain Silva signed a sister cities agreement creating a formal relationship between both for the first time. The signing ceremony took place at La Casa de la Cultura in Mexicali and was attended by council members and the chamber of commerce representatives.

This partnership called for the promotion of both cities related to economic development, cultural and tourism events. During his remarks, Silva spoke about how it personally meant a lot for him since he grew up in Mexicali. As Silva mentioned, the idea of having the sisterhood agreement for the first time in their history was to allow Mexicali residents to discover what El Centro has to offer.

“The City of El Centro is not the “center” just in the name; we are the center of economic activity in the Imperial Valley. It is a vibrant and progressive city with economic, social and political stability. We have an aggressive plan of growth and development focused on improving the quality of life for its residents. We are committed to establishing a long-lasting relationship that will benefit our communities of Mexicali and El Centro,” Silva said during the ceremony.

Silva added that residents of Mexicali contribute to the economy as many of their residents go to school and work in El Centro.

The historic agreement called for a close relationship between both cities moving forward but didn’t grow as expected and the relationship with former Mayor Diaz was minimal.

“There is a lot of opportunity for growth in our relationship and that will be my objective when I get appointed Mayor again,” Silva said.

During his first time as El Centro Mayor, Silva established three main objectives: improving the quality of services for its residents, adopt a strategic plan for El Centro, and establish a relationship with Mexicali.

Silva agreed that the relationship between Mexicali and El Centro needs to be reignited and plans to invite outgoing Mexicali Mayor Gustavo Sanchez and incoming Mayor Marina Del Pilar to re-establish that relationship once again. “Mexicali and El Centro can collaborate in cultural exchanges and work in economic development opportunities,” Silva said.

While the relationship between both cities didn’t flourish as it intended to, Silva took an active role in binational meetings representing the city. Silva took an active role at the Mayor’s Summit that was created by Mexicali Mayor Gustavo Sanchez Vazquez where he invited the mayors from Imperial Valley, Yuma, and San Luis to create this network of collaboration and tackle the issues that affect the border region.

“The work that Gustavo Sanchez did in extending his hand to Imperial Valley was amazing and the Mayor’s summit was an excellent opportunity for all of us. I hope the next administration continues with this idea,” Silva said.