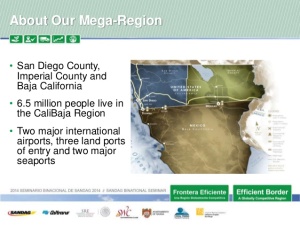 The economic Megaregion of Tijuana and San Diego equals more than 200,000 million dollars annually. Tijuana and San Diego are seeking to become the most productive border worldwide, because of the link already maintained in areas of trade and cultural exchange. The Binational Mega economic region of Baja California and Southern California is growing. Mexico and the United States join forces for the mega region in Baja California.

The economic development of the mega region encompassing Southern California in the United States and Baja California in Mexico seeks to boost investment and employment, gathering the competitive and comparative advantages of each area. Dr. Alejandro Diaz Bautista, economist, National Enquirer of the National Council of Science and Technology and Professor of the College of the Northern Border (Colef) said that in the coming years the Mega Binational Economic region of San Diego and Tijuana will grow.

It is important to note that the mega economic region of Tijuana-San Diego equals to more than 200,000 million dollars annually. San Diego and Tijuana are looking to become the most productive and efficient border globally, because of the link already maintained in areas of trade, economic and cultural exchange.

The initiative of the Mega Region is a collaborative project between the academic, business and public sectors on both sides of the border in Baja California and Southern California to promote the economic development of the region through high-value projects, attracting investment, job creation and regional economic integration of value chains and key sectors and regional and bi-national clusters.

The economic Megaregion of Baja California and Southern California is one of the main regions and high-tech centers in the world. This mega region has a strength of extensive labor and a world-class human capital, with several academic and applied research centers with great national and international prestige, where we have access to capital and a diverse economy, due to its competitive and comparative advantages.

The economic analysis indicates that the 40 mega major world regions account for approximately 66% of economic activity, 86% of patented innovations, like 83% of researchers, professors and most cited scientists, with 19% of the world population.

The County of Tijuana signed a letter of cooperation with the County of San Diego, in which working groups are established from January 2015 to generate bi-national projects of mutual benefit, within the framework of the so-called binational Megaregion. It is about the Letter of Agreement in the Field of Binational Planning and Coordination. San Diego and Tijuana seek to make the most of the opportunity presented by the binational Megaregion in economic development.

The goal is to become the worldwide most productive border, because of the link already maintained in areas of trade and cultural exchange. There is no doubt that the cities of Tijuana and San Diego will benefit from this integration, by being more productive and efficient, and by improving citizens’ quality of life.