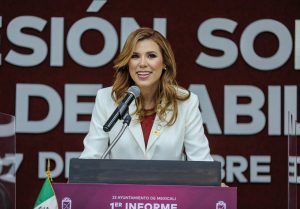 Mexicali, B. C.- The Mayor of Mexicali, Marina del Pilar Ávila Olmedo, had her First State of the City Address before the City Council, highlighting the achievements in 5 main areas: Safety in Mexicali; Challenges in the Contingency; Development of Mexicali does not stop; and Good Government and Sustainable Mexicali.

“From the first day I have generated actions and strategies that have yielded unequivocal results that we are on the right path,” said del Pilar, thus also mentioning the 13 percent decrease in terms of crime this year, being this figure the lowest in the last 10 years, positioning the city as the safest in the state.

Regarding the challenges in the contingency, del Pilar thanked the work carried out by health and emergency services personnel, including firefighters and police, then requested a minute of silence for people who have died from COVID- 19. Thus, the delivery of more than 600,000 food baskets and more than 4 million 800 thousand pesos in medical supplies during the pandemic was mentioned, stating that the municipal government did not stop and priority was given to the most vulnerable sectors.

On the other hand, an investment in public works without the need to resort to credits or debt was reported, which exceeded 290 million pesos. In addition, the reactivation of the Historical Center of the city was highlighted, as well as the support given for sports through the delivery of uniforms and scholarships, reforestation of some areas of the city, and elimination of more than 1,700 linear meters of graffiti as the collection of more 2,500 tons of garbage, through cleaning days.

Moreover, the restoration of La Chinesca as a cultural space for all Mexican families was mentioned, as well as the recovery of Mariachi Park, in which more than 30 massive events have been carried out, all these achievements, she said, thanks to the support received from the State Government, as well as the civil society. “The heart of Mexicali is our Historic Center and in a few days it will beat stronger than ever,” said the mayor.

Del Pilar highlighted the fulfilled commitment she had with women, through the creation of the Fuerza Rosa program to stop gender violence. Regarding the axis of good governance, she highlighted the effort that has been made for the first time in Mexicali, where a citizen participation strategy was established and where it is the citizen who can decide where the resources should be directed.

In addition, during the second year, it will be her goal to work together so that Mexicali becomes the cleanest municipality on the northern border, free of corruption, or order to continue improving surveillance tasks, as well as to meet the goals that have been set. She concluded by thanking her parents and family for their support, as well as all the members of her team.

“Thank you for your trust, and remember that, with hard work, heart, and will, Mexicali now is and will be a role model as a city and a good government,” she added.