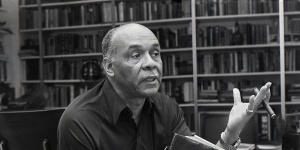 Ralph Waldo Ellison was born in Oklahoma City, the son of an ice and coal dealer and a domestic worker who stressed both religion and the importance of education. Ellison’s early interests were primarily musical; he played trumpet and knew many prominent jazz musicians of the Depression era.

In 1933 he entered Turkegee Institute, intending to become a composer, but he was drawn to literature through his study of contemporary writers, especially T.S. Eliot, whose poem The Waste Land was influential in Ellison’s intellectual development. Ellison left school in 1936 for New York City, intending to earn tuition money for his senior year. There he met figures for the Harlem Renaissance, including Langston Hughes and the younger African-American writer Richard Wright. As his artistic interests shifted toward fiction, he studied the craft by reading systematically through the novels of Henry James, Joseph Conrad, James Joyce, Fyodor Dostoyyevsky, Mark Twain, and others. Ellison found work for a time with the Federal Writers Project and began to publish stories and reviews in the late 1930s in progressive magazines like the New Masses. He also served as managing editor for Negro Quarterly.

Both Tuskegee and Harlem provided him with the material for his first and what proved to be his only completed novel, Invisible Man (1952), a brilliant picaresque adventure of black life that established him as a major force in American Fiction. Invisible Man won the National Book Award in 1953 and in a 1965 Book Week poll was voted the most distinguished American novel of the postwar period. For the rest of his career, Ellison attempted to complete a second novel, once losing an almost-completed draft in a house fire and vainly laboring to come up to his own standards of perfection.

He eventually published several sections of his epic as a work-in-progress but died before satisfactorily working his two thousand pages of drafts into final form. His literary executor edited the material into a standard size novel, ‘Juneteeth’, which was published in 1999. Ellison’s other books include two collections of essays, ‘Shadow and Act’ (1964) and Going to the Territory (1986), and a posthumous volume of short stories, ‘Fling Home’ and ‘Other Stories’ (1996). ‘A Party Down at the Square,’ a brutally direct account of a lynching, was written early in Ellison’s career and later rediscovered and published in Esquire after his death.