The King of Mexican Music, Vicente Fernandez, dies at 81 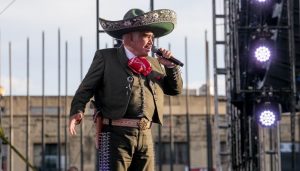 Vicente Fernández, the Mexican entertainer whose illustrious career as the “king of rancheras” spanned decades in music and film, has died. He was 81.

Fernández died in Guadalajara in his home state of Jalisco. He had been hospitalized for four months after a fall at his ranch. Fernández suffered from Guillain-Barré syndrome, which made it difficult for him to recover. Fernández has sold more than 65 million albums and filmed more than 35 movies. He won three Grammys and eight Latin Grammys, in addition to being named Person of the Year by the Latin Recording Academy in 2002.

He was a Mexican singer, actor, and film producer. Nicknamed “El Charro de Huentitán“, “El Ídolo de México“, and “El Rey de la Música Ranchera“, Fernández started his career as a busker, and went on to become a cultural icon, having recorded more than 50 albums and contributing to more than 30 films. His repertoire consisted of rancheras and other Mexican classics.

In the spring of 1966, Javier Solís, Mexico’s most popular traditional singer, died. Discos CBS, the recording label in the Mexican department of CBS Records International, offered Fernández a recording contract. He released his first recording, “Perdóname”, with the company in 1966; Fernández still records for the label, which is now Sony Music Latin of Sony Music Entertainment.

In 1970, just as Fernández was about to go onstage, his father died. Overwhelmed by the news but determined not to let the crowd go without a show, Fernández went onstage and performed. By the end of the night, the critics were comparing him to other famous ranchera artists like José Alfredo Jiménez, Jorge Negrete, and Javier Solís. Since then his music has expanded rapidly. In 1998, he continued to tour despite the kidnapping of his oldest son.

Vicente Fernández was born on 17 February 1940 in the village of Huentitán El Alto, Jalisco, the son of a rancher and a housewife. When he was between 6 and 7 years old, he used to go with his mother to see movies starring Pedro Infante and Jorge Negrete and, as he himself once recalled, he told his mother that “when I grow up I’m going to be like them”.

Since then he had a taste for music and at the age of 8, he was given a guitar, which he learned to play at the same time he began to study folk music. After finishing elementary school, and due to the lack of success in selling milk from the cows on his ranch, the family moved to Tijuana, where a teenage Fernández worked as a bricklayer, painter, and cabinetmaker.