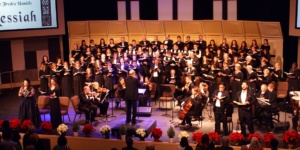 The performance will be 7 p.m. at Christ Community Church, 590 W. Orange Ave, El Centro. Tickets are $15. Admission is free for students in kindergarten through 12th grade. Tickets will be available at the door, chambers of commerce in El Centro, Brawley, Holtville, and Imperial and from any Master Chorale member.

The performance will be the Chorale’s third presentation since it began this biannual tradition in 2015. The event also marks the 60th anniversary of Master Chorale Conductor Dennis Lang’s first Messiah performance in the Valley.

Joining the local musicians will be four accomplished featured soloists, including Brawley native soprano Esther Rayos, currently of Chicago.  After receiving her bachelor’s degree from Sonoma State University and her masters in music voice performance from DePaul University, Rayo has earned top placements in prestigious vocal competitions and performed most recently in “Street Scene” and the title role in Puccini’s “Suor Angelica.”

Von Lehn has performed on opera and concert stages throughout the world. A frequent recitalist in Boston, she also performed as a soloist in Britten’s Ceremony of Carols. Von Lehn made her professional debut in the Boston GuitarFest as a soloist in Castelnuovo-Tedesco’s Romancero Gitano, and as mezzo soloist in the world premiere of American composer Fred Lerdahl’s “First Voices.”

Sokol also has seen success in opera and musical theater in both the United States and Europe, including the Metropolitan Opera, Philadelphia Orchestra, and Chicago’s Steppenwolf Theater. He is currently director of Point Loma Nazarene University’s opera program and has appeared with the San Diego Opera.

Young is currently majoring in vocal performance at Point Loma Nazarene University. In addition to soloing for Point Loma’s annual performance of Messiah, he recently finished a run as Rodolfo in Point Loma Opera Theatre’s production of Puccini’s, La Bohème. Young is a student of Michael Sokol at PLNU, has participated in the past two years in the San Diego Summer Gilbert and Sullivan Workshop, and will be competing in the Metropolitan Opera National Council auditions in Denver later in December.

“This is once again going to be an extraordinary presentation that will not only musically be a fabulous experience, but it will touch many hearts and souls of those in attendance,” said Lang, the Chorale conductor and artistic director.

George Frederic Handel composed Messiah in 1741. It was first performed in Dublin in April 1742 and premiered in London a year later. While it initially had modest public reception, the oratorio gained in popularity and today is one of the best known and most frequently performed choral works in Western music.

For more information about the chorale and this performance, go to www.ivchoralsociety.com