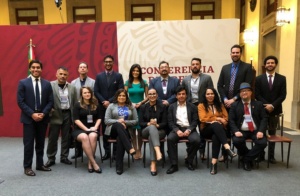 Mexico City.- The Institute for Mexicans Abroad (IME) organized a binational session for Spanish-speaking media outlets from the United States in Mexico City on October 14-15 to raise their awareness about Mexico.

The conference was well-received by a large number of high-profile journalists from a wide range of media outlets covering the border area, cities with large Mexican populations and the nation as a whole.

The group attended the morning press conference given by President Andrés Manuel López Obrador, in which the Mexican Security Cabinet also participated, giving it a first-hand understanding of the new dynamic of communication and transparency promoted by the current administration.  Following the press conference, the journalists conversed with the president’s communications director and spokesperson, Jesús Ramírez. The group then met with Mexican journalists to discuss the challenges they face in common, as well as opportunities for collaboration in the near future.

In the Foreign Ministry, the journalists learned about social projects, the government’s ties with the migrant community and the work done by IME together with the consular network. They met with senior officials, including Undersecretary for North America Jesús Seade; IME Director-General Roberto Valdovinos; Communications Director Roberto Velasco; Julián Escutia, Director General for the Protection of Mexicans Abroad; and Mario Chacón, Director General for North America. The group then met with Public Administration Secretary Irma Eréndira Sandoval and Ángel Villalobos from the Economy Ministry on behalf of other federal agencies.

In response to the interest of journalists who work primarily with the Mexican community in the United States, meetings were organized with civil society organizations in Mexico, with a focus on the case of repatriated Mexican citizens.  Lastly, the journalists visited the Museum of Memory and Tolerance and attended cultural events such as the Folkloric Ballet in the Palace of Fine Arts.

The Institute for Mexicans Abroad and the Foreign Ministry reaffirm their commitment to the Mexican communities abroad, and to free and critical journalism.