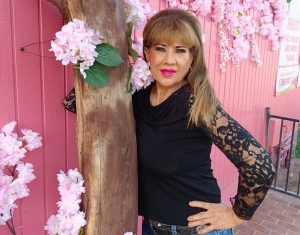 Rosa Maria was eight years old when she lived for a while with her grandmother Clarita in the town where she comes from, Guadalupe Victoria, better known as Kilometer 43, located in the Valley of Mexicali in the state of Baja California.

Every day, Rosa María helped her grandmother prepare food and she taught her how to harvest different spices and aromatic plants so that she would learn to use them in the kitchen. This experience marked Rosa María’s destiny as a Chef because it was there that her love for cooking and her curiosity to create her own dishes were born.

In 1988, the “Plane Food” restaurant, located right in front of the border and next to the Calexico airport, was put up for sale and Rosa María saw a great opportunity with it, since she was certain that, by giving it another twist, it could be a success. So then between Rosa María and Francisco Javier, her husband, they both took their savings and bought what would become known as Rosa’s Plane Food. Despite the fact that the road was not and has not been easy at all and taking into account that this was a time when social media and the internet didn’t exist, word of mouth allowed the success of the business because when customers tried the One hundred percent authentic Mexican food that Rosa María cooked, they started spreading the word. Little by little, Rosa’s Plane Food consolidated to this day as a Mexican artisan food restaurant that combines the best of seafood and meat.

Rosa María recalls that her kitchen was adapted to the needs and tastes of the border population and that she always opted to offer a unique and innovative Mexican flavor, using the culinary heritage that forged her, as well as what is the product of her own invention, exploration, and gastronomic vision, in part, enriched by the trips she made to the different states of the Mexican Republic.

For more than thirty-four years, Rosa María has cooked with her own hands and original recipes, each of the dishes tried by her clients, many of whom have become good friends after visiting Rosa’s Plane Food from different cities in the country and the world, including international artists, such as Los Tigres del Norte, Juan Gabriel, Marco Antonio Solís “El Buki”, Pepe Aguilar, Paquita la del Barrio, Harrison Ford, Pierce Brosnan.

Among the iconic dishes at Rosa’s Plane Food is the shrimp ceviche, a reinterpretation of Sinaloan ceviche, the Michoacán-style pork carnitas made with the recipe she inherited from her father, the various cuts of steaks such as Rib Eye and the cabrería, the quesadillas with shrimp in chipotle pepper, the stuffed peppers with cheese and shrimp, the machaca, the beans, and the sauce.

Rosa María Barajas Muñoz is a proud representative and outstanding Chef of  Mexicali Valley and the Imperial Valley in California, an enterprising, strong, and tireless woman who has been distinguished and awarded nationally and regionally for her authentic Mexican and border cuisine. A woman who was born with a natural gift for cooking and who for more than three decades has allowed us to taste her dishes distinguished by their exquisite and original flavor. Rosa María is deeply grateful to all her clients because she assures us that, thanks to their loyalty, she has been able to keep her business running successfully throughout all these years.