I had the “luck” of being born on December 25. This meant that my birthday always coincided with Christmas. Fortunately, my mother always threatened my relatives that it was important for my personal development to be given two gifts that day, not just one. On the other hand, most of my family and friends have always lived in Mexico City, so December 25 was always a day that I could share with my loved ones.

But my intention is not to talk about my birthday, but about the history of the day in which Christmas is celebrated. For many years I have enjoyed the study of history and religion, and above all, I have always had a special fascination for the truth. For these reasons, and because it has always been an important day for me, I have researched deeply about the origin of December 25.

Different historians, anthropologists, and theologians tell us that, most probably, the first occasion in which Christmas was celebrated was in the time of the Roman emperor Constantine I, specifically in 336 A.D. At this time Christians had already acquired great importance in the territory that encompassed the Roman Empire. Constantine, instead of trying to eliminate this growing religion, preferred to adopt it. 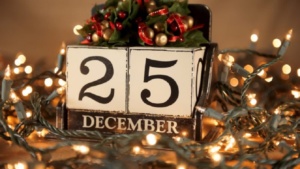 But the adoption was not “perfect.” When they determined that Christianity would become the official religion of the empire, Constantine and the new leaders of what would be known as the Roman Apostolic Catholic Church combined the rites and beliefs of the original Christianity, which had a lot of Jewish in it (the Solemn Feasts, like Easter or the Feast of Trumpets, were still celebrated), with Roman (pagan) beliefs and traditions.

It is then that a big change in the Christian world is generated by changing Saturday (Sabbath) for Sunday as a sanctified day since many Romans worshiped Mithras (the sun god) this last day. Likewise, the Christmas festival is created on December 25 to coincide with the Roman festival of Saturnalia, during which, in the last days of the year, the god Saturn was celebrated

All this mixture of beliefs of the original Christian church with pagan traditions is known as “syncretism.” In fact, any attempt to combine different religious doctrines to achieve a common belief is known as syncretism. All religions today, being the product of historical developments and being affected by political and sociological factors throughout the centuries, are the result of syncretism.

What we are sure of is that Jesus of Nazareth was not born on December 25.

The idea is not to steal anyone’s illusions about the “purity” of what the day means, but to be as factual as possible regarding this famous and celebrated day. Everyone can give it the meaning they desire.

I just hope Santa Claus brings me at least two gifts this year.