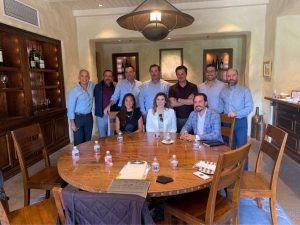 Last Friday, September 4, and Saturday, 5 of this year, a bilateral tour was carried out to visit the Napa Valley led by a delegation of Mexican wine producers and the elected governor Marina del Pilar Ávila.

Before the arrival of Marina del Pilar Ávila, meetings were held with the heads of different organizations that make up the wine sector of said region, such as Napa Vintners Association, Napa Green, and Napa Valley Wine Institute, and upon arrival, the governor-elect had a reception with the leaders of Visit Napa Valley, Napa Valley’s leading tourism agency, as well as Napa District 4 Supervisor Alfredo Pedroza and US Senators Ben Hueso and Bill Dodd.

Although in the Valle de Guadalupe there are planning programs that give the region ecological viability, the Achilles heel has been their implementation to turn them into useful instruments for the development of the area and not a dead letter as they are currently. For this reason, the dialogue in the work tour included establishing bilateral workgroups to strengthen ties between both regions, emphasizing the importance of exchanging process experiences, but above all the incorporation of sustainable and regulatory practices in the valleys of Ensenada, that give you certainty in the medium and long term, as they have been successfully implemented in the Napa Valley.

To strengthen ties with the producers of this area, a meeting was held with the Association of Mexican-American Winemakers (MAVA), where they discussed the history of migration, its impact on wine production, and the alliances that can be created between these two regions and the exchange of promotion of the wines of each area.

For her part, Marina del Pilar Ávila on this tour endorsed her support for the Baja California wine sector through a protection scheme for the agricultural vocation of her valleys, stating that she will have close coordination with Napa to promote twinning. She proclaimed herself “the Governor of Wine” and expressed that during her administration the best environmental and water use practices will be promoted to place Baja wine.

California is at the forefront of international competitiveness.

In turn, the governor-elect in conjunction with Mexican producers made a formal invitation for Napa Valley to join as a wine region in the 43rd World Congress of Vine and Wine to be held in October 2022 based in Baja California.