THE GOVERNMENT OF MEXICALI STRENGTHENS COORDINATION WITH CUSTOMS AUTHORITIES AND U.S. CUSTOMS AND BORDER PROTECTION 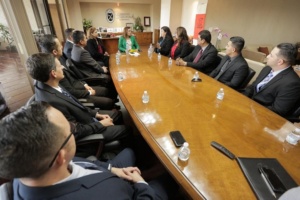 Mexicali, B.C .- As part of the binational coordination and to strengthen public safety work, the City Mayor of Mexicali, Marina del Pilar Ávila Olmeda, met this week with the head of Customs and Border Protection at El Centro, CA., Gloria Chavez and with her work team.

In a meeting that was held in the offices of the Municipal Presidency, the Mayor, accompanied by the Director of Municipal Public Safety Maria Elena Andrade Ramirez, spoke with the head of the Border Patrol, where issues that impact both countries were addressed, such as crossing of migrants, seizure of drugs, strengthening safety at the Historic Center, among other issues.

Marina del Pilar, stressed the importance of strengthening binational ties and working in coordination with the Border Patrol, as this allows progress in projects that benefit both communities such as the construction of a new bridge at the new international west port of entry, the regeneration project of the Historic Center, and efforts being promoted by the XXIII City Council of Mexicali.

For his part, Gloria Chávez, expressed her gratitude to the municipal police, for their support in the protection of the border fence, in this regard, she highlighted the communication and coordination they have had with the current municipal administration. The CBP Delegation attending was formed by CPA Gloria Chávez, ACPA Daniel Sandez, ELC Logistics Director Nubia Bastidas, OCC Senior Attorney Nelson Wong, Adjutant Jerami Cheatwood, Linkage Supervisor Luis Gómez, Linkage Supervisor Ricardo Escobar and Linkage Supervisor Victor Urbano.