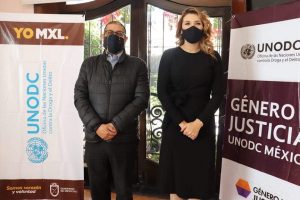 In order to prevent physical, psychological, sexual, and gender violence against girls, boys, and adolescents in an interactive way, the Municipal Government established an alliance with the United Nations Office for Drugs and Crime (UNODC), to through which the education program for justice will be promoted in conjunction with the Universities of Mexicali.

As a result of the work tour that Mayor Marina del Pilar Ávila Olmeda made to Mexico City, teachers will be provided with all kinds of materials, training, documents, and expert presentations. There will be classes on anti-corruption, security, and ethics, in order for teachers to become promoters of the anti-corruption fight and train fair students.

The “Chuka” game will be provided to the City Council, which is a digital App to prevent physical, psychological, sexual, and gender violence in children and adolescents in an interactive way.

In addition to this, there will be a liaison between the Institute for Women of Mexicali and the one in charge of the Prevention of Gender Violence by UNODC in order to promote a greater number of concrete actions in the matter, particularly within the framework of the International month for the Elimination of Violence against Women.