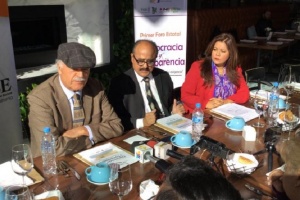 The first State Forum on Democracy and Transparency organized by the State Electoral Institute of Baja California (IEEBC) takes place today and participating in it are the Commissioner President of the National Institute of Transparency, Access to Information and Data Protection (INAI), Francisco Javier Acuña, who will give the keynote address.

In a press conference, the President of the IEEBC, Clemente Custodio Ramos, who was accompanied by the Electoral Councilors, Bibiana Maciel López and Rodrigo Martínez Sandoval, informed that the forum will also include the participation of José Antonio González Flores, Head of the Unit of Training of the Electoral Judicial Training Center of the Electoral Tribunal of the Judicial Power of the Federation, Blanca Lilia Cadena, Director of the Congress Channel and President of the Network of Educational and Cultural Radio Broadcasters of Mexico, Luis F. Fernández, Executive Director of Us for Democracy A. C and Gustavo Espinosa Padrón, Electoral Counselor of the Electoral Institute of Coahuila, who will be part of the panel in the conversation “Citizen participation and transparency: heading to 2018 elections”.

Regarding the trajectory of the panelists, Clemente Ramos stressed that in the case of José Antonio González Flores, he has worked in the Electoral Tribunal of the Judicial Branch of the Federation since 1998, serving as a Research Professor in the Electoral Training Center where he taught more than a hundred courses, workshops and conferences on electoral issues; Blanca Lilia Ibarra has a degree in Communication Sciences with a master’s degree in Public Administration, who has been Director of the Documentation Center of the Electoral Court of the Federal Judicial Branch, has also served as Chair of the Commission for Access to Public Information and Protection of Personal Data of the Federation, in addition to 25 years in various management positions in the press, radio and television in the State of Puebla; for his part, Luis F. Fernández is a teacher in administration and public policy and has served as Electoral Counselor of the National Electoral Institute in District 9 of Mexico City for the process of integrating the Constituent Assembly and for the electoral processes of 2012 and 2015; and Gustavo Espinosa Padrón, who has a postgraduate degree in Public Administration and Policies and in his career highlights his position as Manager of Tax Collection in the National Institute of the Housing Fund for Workers, as well as his performance as Deputy Director General in the State Housing Commission and Responsible for the control table of the Update and Taxpayer Registration Program in the Ministry of Finance of the State of Coahula.

Ramos Mendoza reiterated the invitation to the community to attend this Friday, November 24, at 9:00 a.m., time at which the registration will take place, in the El Cubo room, inside the facilities of the Tijuana Cultural Center.

Finally, the chairman of the board stated that through the IEEBC website, interested people can reserve their space in advance for pre-registration which is available at the link: http://www.ieebc.mx/democracia1/index.html