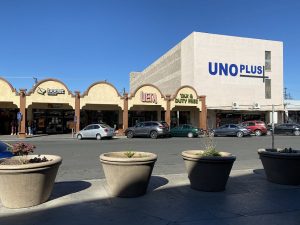 When the travel restrictions end at midnight Nov. 8 it will be like returning to normal as people will be able to cross again to shop in Calexico or see their families in person for the first time in almost two years.

With this, the east port of entry will operate again from 6 in the morning until 10 at night, thus returning to the dynamics we had before the pandemic.

Families reunited and a border town anxiously awaiting to welcome back their shoppers who represent 90 percent of their customers. Although long lines are expected, the return of those who were not “essential” or American citizens will be an event in itself.

“I’m going to visit my two daughters and my grandchildren!” exclaimed Blanca Gonzalez in a survey done by Garitas Mexicali, Tiempo Actual on Facebook when asked what were their plans now that they would be able to cross to the United States.

“As for the tourist visa, I have paid concert tickets for two years for three concerts that I am looking forward to,” said Marialena Balcazar Jimenez.

Others are not that enthusiastic as they have found places in Mexicali and have no need in shopping here again.

Starting November 8, 2021, the Department of Homeland Security (DHS) will allow non-citizen travelers who are fully vaccinated for COVID-19 and have appropriate documentation to enter the United States via land ports of entry (POE) and ferry terminals.

Non-citizen travelers should be prepared to:

Any non-citizen attempting to enter the United States through illegal means or without appropriate documentation may be subject to expulsion or removal. Travelers arriving at a U.S. land port of entry or ferry terminal should be prepared to present any other relevant documents as requested by a Customs and Border Protection (CBP) officer.

U.S. citizens are reminded to bring a Western Hemisphere Travel Initiative (WHTI) document, such as

When re-entering the country be prepared to present a WHTI-compliant document if requested by a CBP officer during a border inspection.

Unvaccinated travelers may continue to cross the border for essential travel, including lawful trade, emergency response, and public health purposes.

Essential travel includes, but is not limited to:

Members of federally recognized Tribes, whose reservations span the United States-Canada border, are also considered essential when traveling from one part of a reservation to another.