The epicenter of Pandemic Organized a Pool Party 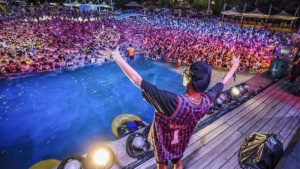 Thousands of partygoers packed out a water park over the weekend in the central Chinese city of Wuhan, where the coronavirus first emerged late last year, keen to party as the city edges back to normal life.

The popular Wuhan Maya Beach Water Park was filled with people frolicking in swimsuits and goggles for an electronic music festival, many perched on rubber dinghies or wading up to their chest in water.

The water park reopened in June after Wuhan gradually opened up after a 76-day lockdown and strict restrictions to try and control the spread of the virus. The park — which local media says has capped attendance at 50 percent of normal capacity — is offering half-price discounts for female visitors.

The outbreak was first identified in December 2019 in Wuhan, China. The World Health Organization declared the outbreak a Public Health Emergency of International Concern on 30 January 2020 and a pandemic on 11 March. As of 17 August 2020, more than 21.7 million cases of COVID‑19 have been reported in more than 188 countries and territories, resulting in more than 776,000 deaths; more than 13.7 million people have recovered.

On 30 December 2019, a test report addressed to Wuhan Central Hospital, from company CapitalBio Medlab, stated that there was an erroneous positive result for SARS, causing a group of doctors at Wuhan Central Hospital to alert their colleagues and relevant hospital authorities of the result. Eight of those doctors, including Li Wenliang (who was also punished on 3 January), were later admonished by the police for spreading false rumors; and another doctor, Ai Fen, was reprimanded by her superiors for raising the alarm. That evening, the Wuhan Municipal Health Commission issued a notice to various medical institutions about “the treatment of pneumonia of unknown cause”. The next day, the Wuhan Municipal Health Commission made the first public announcement of a pneumonia outbreak of unknown cause, confirming 27 cases—enough to trigger an investigation.