Breaking News
Home / ECONOMICS / The economy, the caravan and the November elections in the United States

The economy, the caravan and the November elections in the United States

Trump takes up a strong rhetoric about immigration in the middle of the caravan and elections in November 2018.

On November 6, the United States will go to the polls for its mid-term elections, where much of the Congress and state governments will be renewed.

Analysts, experts, and academics believe that the vote will be decisive since it can change the current structure of the two chambers of the legislature, now dominated by the ruling Republican Party.

“President Trump came to the presidency using a very strong rhetoric about immigration, talking about crowds crossing the southern border of the United States. However, the economy of the United States is in a stage of economic growth, “said Dr. Alejandro Díaz Bautista, an economist and national researcher at Conacyt, as well as a research professor at El Colegio de la Frontera Norte (El Colef).

The economy grew by 4.2% in the second quarter of the year, the biggest economic growth since 2014. Unemployment fell to 3.7%, the lowest value since 1969.

Although experts and scholars agree that the good economic moment cannot be attributed to Trump’s policies, the picture is positive for the party in power in the United States. So the Republican strategists recommended Trump focus on the issue of economics.

A few weeks before the midterm elections, Trump appeals to the same formula of immigration to try to counteract the progress that Democrats are expected to achieve in the United States Congress. While the Ministry of Foreign Affairs of Mexico said that the government was helping members of the caravan who had already entered Mexican territory, explaining the options that lay ahead and assisting those who wanted to apply for refugee status. 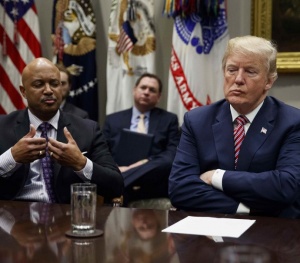 Some surveys in the United States say that the electorate believes that immigration is one of the most important issues, although not as important as the economy and health insurance. Recent polls by CNN and the Washington Post-ABC News indicated that, by a narrow margin, voters believe that Democrats will know how to handle immigration better than Republicans.

This week, at a rally in Montana, Trump referred to the November legislative elections as “the elections of the caravan.” According to a September poll by The Wall Street Journal and NBC, 61% of voters believe that immigration benefits the United States.

Finally, President Donald Trump warned Mexico that, if it does not act towards preventing the passage of the Central American migrants’ caravan, not only will he close the border, but he will deploy the army in the area.