The importance of unpaid work is equivalent to 27.6% of GDP.

INEGI presented the results of the Satellite Account of Non-Remunerated Work of Households in Mexico (CSTNRHM) 2020, with the aim of providing information about the economic value of the hours of unpaid work that household members devote to domestic work and care.

In 2020, the economic value of domestic and care work performed by the population aged 12 and over reported an amount of 6.4 billion pesos, equivalent to 27.6% of Mexico’s GDP.

The activities that presented the greatest growth in hours were health care within the home with 9.4%, followed by cleaning and maintenance of the home with 7.5%, support activities for other households with 7.3%, and feeding tasks with 4.8 percent. hundred.

In contrast, volunteer work activities decreased by 13.8%, followed by general care, school help, and support (includes transfers and accompaniment) which fell by 6.2%, and purchases and home management decreased by 3.6 percent. In 2020, the net economic value per capita reported an increase of 11.1% compared to the previous year, reaching 49,437 pesos per person. In this sense, each woman carried out unpaid domestic and care work equivalent to 69,128 pesos per year, while each man carried out similar activities equivalent to 27,175 pesos. 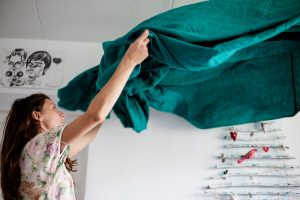 Regarding the hours that each person used in the production of goods for self-consumption, in 2020, men spent 5.8 hours per week, while women spent 4.6 hours. Likewise, each girl between the ages of 5 and 11 dedicated an average of 5.5 hours a week to housework and housekeeping, while boys collaborated with 5.1 hours in the same period.

Women own a third (36.6%) of the micro, small and medium establishments of manufacturing, commerce, and private non-financial services (MSMEs).

Women owners hire more women to work (two paid women for every man) and 86.1% of their staff remain employed throughout the year. The gender gap in the total workload (paid and unpaid) is 13.4 hours per week on average.

The greater workload for women is reflected in less availability of free time: on average 4.2 hours a week.

The average female participation in the labor force of all countries in the world is still 20% lower than the male rate and there are still gender gaps in wages and access to education, according to the International Monetary Fund (IMF).

The employment situation among women around the world has worsened with the covid-19 pandemic, because many of the jobs that were lost were in the area of ​​services and care, with a large female presence in 2020. Dr. Alejandro Díaz -Bautista, International Economist and Research Professor at El Colef.