THE CONSULATE OF MEXICO IN CALEXICO AWARDED SCHOLARSHIPS 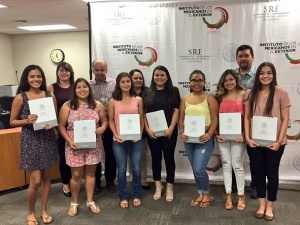 The Consulate of Mexico in Calexico awarded scholarships to scholars who graduated from Calexico Unified School District and are now seeking a college degree.

Thanks to the collaboration between the Calexico Educational Foundation and the Institute of Mexicans Abroad, scholarships were given to ten students from Calexico and received $1,000 each to cover their university expenses.

The IME-BECAS program was formed in 2005 at the initiative of the Government of Mexico to contribute to the educational development and improvement of Mexican migrants living in the United States of America.

The program supports students so they can continue their academic education.

Since its inception in 2005, more than 56,000 students have benefited from the IME Scholarship program in the United States.