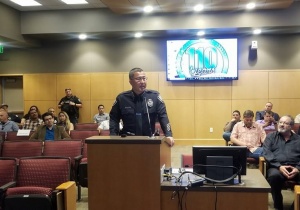 “I am very excited to welcome Brian Johnson as our Chief of Police. We look forward to having Brian be part of the best and brightest Police Department we have. I am confident Chief Johnson will work diligently to mentor our young officers, implement the strategies recommended in our recent comprehensive operational study, and have significant involvement in the development of our new police station” stated Marcela Piedra, City Manager.

“The City Council is excited to welcome Brian Johnson to El Centro as our Chief of Police. We look forward to Chief Johnson’s leadership of our outstanding Department and his strategic vision in working with the City Council on addressing staffing challenges, implementing programs, and the construction of a new police station” stated Mayor ViegasWalker.

Chief Johnson brings over 29 years of dedicated law enforcement and public service to both the residential and business community of El Centro. During his career in law enforcement, he has established an extensive background in community policing, traffic safety and datadriven crime prevention strategies.

Chief Johnson earned his Bachelor of Science degree in Criminal Justice from California State University Long Beach and a Master’s degree in Behavioral Science from California State University Dominguez Hills. Chief Johnson is also a certified trainer and coach for the John C. Maxwell Team and International Academy of Public Safety / Institute for Credible Leadership Development. Chief Johnson stated, “I am very honored with the opportunity to service along-side the men and women of the El Centro Police Department. The El Centro Police Department has a rich history of providing excellent police service and I am confident we will build on this legacy of developing best practices in law enforcement. I look forward to working with both the residential and business community to collaborate to enhance the quality of life in the City of El Centro.”