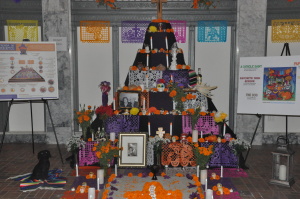 Many people came together on Wednesday November 2nd evening in the celebration of Día de los Muertos (Day of the Dead) as a celebration of the life of those who have perished.

The event took place at the Old Post Office Pavilion in El Centro, CA, which is now officially Imperial Valley Casa de La Cultura and was filled with altars, artwork and decorations as part of the second annual celebration of the traditional Mexican holiday, which was organized by the City of El Centro in collaboration with the Mexican Consulate of Calexico.

Many people might still wonder what the “Día de los Muertos” is all about, but ‘the days of the dead’ are truly a celebration of life.  When children dance with caricatures of death, eat skull sugar molds and learn to respect that life is brief, they learn there is a circle to life and to not fear death and then are free to enjoy and appreciate every moment in life.

Some Christian’s hold to the belief structure that every day should be treated like Christmas, – as every day Christ’s love is born and should be celebrated.  Therefore, the positive, compassionate attitude that is associated with the Christmas season would ideally be maintained throughout the year. Christmas Day is celebrated formally to remind us of this value.  The day of the Dead is similar.  During the days of the Dead, some believe that the souls of the departed return to earth to visit with and to provide council or give advice to family and loved ones.  There is a belief that this is true every day, but that November 2nd is the day set aside to remember and honor those who have died.

In Mexico, there is a tradition of visiting gravesites.  Unlike the United States where graveyards are privately owned and maintained, graveyards in Mexico are often publicly owned or managed by local churches.  It is up to the families of the deceased and other community members to maintain the graves.

During the days of the dead, the family often takes the opportunity to visit the gravesite and pull weeds, clean any debris and decorate the graves of loved ones.  Often candles, flowers and the favorite foods of the deceased are placed on the grave and the family visits, eats, sings and tells favorite stories about those who have died.

In the United States or for those for whom visiting the gravesite is not viable, (often graveyards are closed during the evening hours) the tradition has been adapted.  Many set up altars in their homes and often communities host a variety of events.

Food placed on the altar consists of the loved ones favorite dishes and treats.  Drinks should be placed in the altar to quench the thirst of the dead after their long journey back home.  In many villages it is customary to offer alcoholic beverages.  Salt is considered the spice of life and is one of the staples that are often left at the altar.  The scents of marigolds as well as burning copal (a resin of the copal tree) are thought to be most beloved by the spirits of the dead and invite them back home.

The rituals used to celebrate the day are varied and colorful in every region.  Yet, all carry the same message, celebrating the day of the dead is a true celebration of life.