The Canalization Cleaning of the Tijuana River Continues 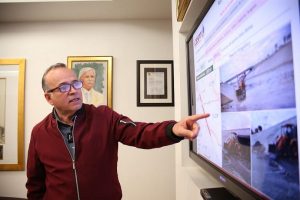 The State Government will maintain the effort of cleaning the Tijuana River canalization because it is part of a comprehensive project which includes the care of people living on the streets for many years, without having support from the authorities.

The Secretary for Water Management, Sanitation, and Protection, Salomón Faz Apodaca, said that the National Water Commission (CONAGUA) is making progress in the replacement of the floodgates of this infrastructure.

It also reported that maintenance was given to a 600 linear meter section of the height of the Simón Bolívar bridge, removing 86 cubic meters of trash and sediment.

Regarding the construction of the Coastal Collector, Salomón Faz Apodaca mentioned that there are already works in the three phases that comprise the entire work: the collector itself (pipeline), the Coastal Emitter, and the Pumping Station.

“The projects will be working simultaneously, the gully is a drilling, of rod and cement construction, which is the intermediate part between the Collector and the Emitter, to carry out the wastewater in Rosarito Norte (treatment plant),” he described.

He added: “This work solves the issue in 4 kilometers of the area (Playas de Tijuana and Rosarito beaches) to avoid that between 100 and 120 liters per second of wastewater go into the sea.”

Governor Jaime Bonilla Valdez asked the Secretary of Water to maintain contact with the population of Lomas de Coronado in Rosarito, to verify the drainage connection work, which is to be concluded and that it was a commitment of the State Government.