THE CALI-BAJA REGION SUFFERS THE ECONOMIC EFFECTS OF COVID-19 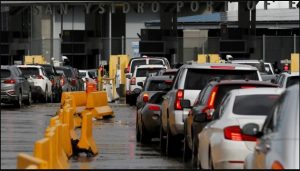 Mexicali, B.C.- The synergy between Mexico and the United States, generated by the commercial relationship of the Cali-Baja mega region, has suffered a negative economic impact so far due to the health contingency by COVID-19, putting its geographical area strength at risk.

After the closure of the border between Mexico and the United States for non-essential travel, the economic flow has been slowed down in the cities and counties that make up the northern and southern fringes of both latitudes respectively, explained the Enrique Luna Gutiérrez (MBA), Coordinator of the International Public Accountant Degree at CETYS University Campus Mexicali.

The academic commented that the economic ecosystem of Cali-Baja is being affected in a multifactorial way, given that in the same period, simultaneous phenomena such as the financial and health crisis take place, the closure of businesses mainly in the counties of Imperial and San Diego, as well as the development of the US presidential electoral process.

The Cali-Baja zone is divided into sections. As the border closures are prolonged, the economy of the Mexicali-Calexico and Imperial Valley strip is being much more affected than that of Tijuana and San Diego, due to the closure of shops and department stores that are registered even in large shopping centers, due to the lack of customer flow.

Continuing with the omission of where it explains what it is and the purpose of CaliBaja, we can say: -According to data from the Secretary of Economic Development, even before the health emergency due to COVID-19, this megaregion generates annually 2.5 billion dollars of foreign investment.

“Cali-Baja is a dynamic region in which strategies are generated to promote economic growth, providing greater opportunities for innovation, research, technology and science, in a prosperous place for foreign investment in Mexico, so reviving the daily dynamism that characterizes this area is imperative to maintain the benefits in both countries”, explained the teacher.

We are faced with a scenario in which economic reactivation is carried out in a staggered manner, and in which we must adhere to the restrictions indicated with each color of the epidemiological traffic light, so “depending on its evolution, it is expected to see how commercial dynamism is also revitalized on both border sides of the Cali-Baja region “, concluded the Coordinator.