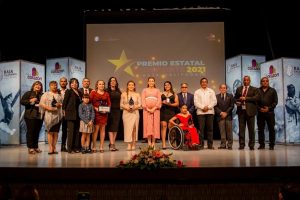 The Olympic bronze medalist in weightlifting in Tokyo 2020, Aremi Fuentes as Athlete, José Manuel Zayas as Coach, and Tania Jiménez as Paralympic Athlete, are the winners of the 2021 State Sports Award, awarded at the CETYS University Theater.

After the voting protocol, also done at the CETYS University facilities, the governor of Baja California, Marina del Pilar Ávila Olmeda, led the award ceremony in which Aremi Fuentes and José Manuel Zayas received the amount of $170,000.00 and Tania Jiménez earned $70,000.00.

“I want to commit myself again, that in the coming years, their only concern is to dedicate themselves to training in the sports discipline they practice and they won’t be worried or be distracted about having plane tickets.

Through the Institute of Sports and Physical Culture of Baja California, directed by Lourdes Cañez Martínez, the best from the period November 1, 2020, to October 10, 2021, met at the gala night to reward the best of the State 29.

According to the jury, made up of 15 people, the second place for Athlete was Olympic bronze medalist in archery, Luis “Abuelo” Álvarez, and the third place for the Olympic gymnast and fourth in Tokyo 2020, Alexa Moreno, who are awarded a laptop and iPad, respectively.

Also in the presidium of honor were the municipal president Norma Bustamante, the deputy Juan Manuel Molina, the one for Education Gerardo Solís, the president of the State Association of Sports Chroniclers, who also presented awards to the winners.