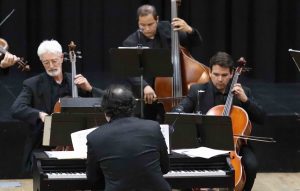 A series of concerts to say goodbye to the year will be broadcast via Facebook by the Baja California Ministry of Culture within the framework of its digital program “La Cultura Continúa” on December 30 and 31 with the participation of members of the Redes 2025 Program, the children’s and youth orchestras, ensembles and choirs of the Cultural Project Strengthening the State Music Network, the renowned DJ Pepe Mogt, the small-town group, and independent musicians.

After its premiere on November 21 at a drive-in show at the Centro Estatal de las Artes of Tecate, the audiovisual production Maija-Awi with Pepe Mogt and its broadcast at various national music festivals such as Mutek, this musical concept can be appreciated from the  @BC.SecretariaCultura page on Facebook from December 30 to January 1.

Maija-Awi shows through rhythms one of the iconic places of Baja California, La Rumorosa, with a script by Ejival and Ángel Estrada and the participation also of Ernesto Aello and Carlos Leyva.

On Wednesday 30 at 6:00 p.m., the virtual edition of the annual concert “Finale” will also be seen from home, within the framework of the CAM at Home Cycle, with the participation of the members of the Networks 2025 Program.

This same Wednesday, at 6:30 p.m., a special concert will be screened that integrates the results of the Cultural Project Strengthening the State Network of Music in Baja California 2020, with the interpretation of the “Hymn to Joy,” by Ludwig van Beethoven.

In this closing concert of the cycle, the Children’s and Youth orchestras Río Nuevo, El Centinela (Mexicali) and Mar de Cortés (San Felipe), the Kuchumá (Tecate), Wua-Kuatay (Playas de Rosarito) and the Katañú choirs (San Quintín) Kuchumá (Tecate), Cachanilla (Mexicali) and Wua-Kuatay (Playas de Rosarito), under the coordination of the Auka Music School of the Baja California Institute of Culture.

At 7:00 p.m., the Tecatense group Little City will present Acoustic Set, by Punk Rock, under the coordination of CEART Tecate.

On Thursday 31st at 5:00 pm, the concert “Música Clásica” will be presented with the participation of Mario Lamadrid on piano, soprano Diana Nevárez, and José Luis Rodríguez on double bass.

To find out about the activities of the Ministry of Culture, visit www.facebook.com/BC.SecretariaCultura or the portal www.icbc.gob.mx.